Ian Rankin - The Naming of the Dead 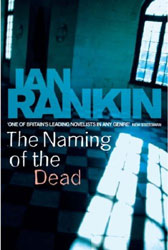 July 2005, and the G8 leaders have gathered in Scotland. With daily marches, demonstrations and scuffles, the police are at full stretch. Detective Inspector John Rebus, however, has been sidelined, until the apparent suicide of an MP coincides with clues that a serial killer may be on the loose. The authorities are keen to hush up both, for fear of overshadowing a meeting of global importance - but Rebus has never been one to stick to the rules, and when his colleague Siobhan Clarke finds herself hunting down the identity of the riot cop who assaulted her mother, it looks as though both Rebus and Clarke may be up pitted against both sides in the conflict. THE NAMING OF THE DEAD is a potent mix of action and politics, set against a backdrop of the most devastating week in recent British history.

Click here to buy 'Ian Rankin - Naming of the Dead'