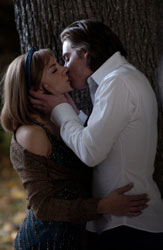 A glittering array of guests hand-picked from Elton John’s address book, are expected on the red carpet to join cast members Kevin Zegers, Samaire Armstrong and Sharon Osbourne for the World Premiere of romantic comedy It’s A Boy Girl Thing, on Monday 18th December at the Odeon West End.

Lining up to be the glitziest and most glamorous Christmas Party of 2006, it’s an event not to be missed! It’s a Boy Girl Thing will be released in cinemas nationwide by Icon Film Distribution on December 29th 2006.

It’s A Boy Girl Thing is a high-jinx romantic comedy about next-door neighbours who live worlds apart. Woody Deane and Nell Bedworth, life-long sworn enemies, wake up one day to find themselves in a very strange place: each others bodies. In their switched identities, each sets about to destroy the other’s high school reputation. When they start to succeed they get more than they bargained for. Sometimes falling in love can be an out of body experience.