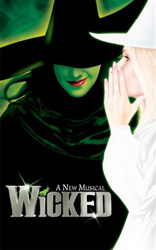 FLIES IN TO LONDON FROM THURSDAY 7 SEPTEMBER

WICKED, Broadway’s smash-hit musical that tells the untold story of the Witches of Oz, will open at London’s Apollo Victoria Theatre on Wednesday 27 September with previews from Thursday 7 September. Booking opens on Sunday 5 March at 9am.

Two girls meet in the land of Oz. One, born with emerald-green skin, is smart, feisty and misunderstood. The other is beautiful, ambitious and very, very popular. WICKED is the story of these two unlikely friends and how they end up as the Wicked Witch of the West and Glinda the Good Witch.

Based on the novel by Gregory Maguire, WICKED has music and lyrics by Stephen Schwartz, book by Winnie Holzman, scenic design by Eugene Lee, costumes by Susan Hilferty, lighting by Kenneth Posner, sound by Tony Meola, orchestrations by William David Brohn, musical staging by Wayne Cilento and is directed by Joe Mantello.

Winner of fifteen major awards, including the Grammy and three Tonys, WICKED has played to over 1.75 million people since opening at the Gershwin Theatre on Broadway in October 2003.  The musical is also playing to sell-out audiences in Chicago and on a record-breaking North American tour.