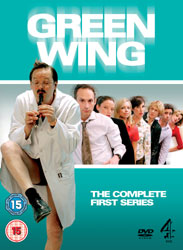 The must have comedy DVD this Easter!

“The most original, the silliest and the funniest thing on for ages” The Guardian

This genre-defying comedy is part surreal soap, part comedy drama and proves that filming in a hospital doesn’t have to involve any reference to medical issues.

'Green Wing' follows new surgical registrar Dr Caroline Todd (Tamsin Greig) through her first day at work and beyond, starting out as she means to go on - dishevelled and under-deodorised having spent the night in her car.

Along the way she meets an assortment of bizarre and demented characters including; Guy Secretan (Stephen Mangan), the smooth talking part-Swiss anaesthetist and all-round misogynist; Dr. Alan Statham (Mark Heap), one of the kinkiest doctors on the ward, a stammering eccentric radiologist who has powerful sexual feelings for Joanna Clore  (Pippa Heywood) the moody age-obsessed HR Director.  Then there’s the high flying but effortlessly cool, Dr. 'Mac' MaCartney (Julian Rhind-Tutt), whom Caroline may or may not have a big-time crush on; the sociopathic staff relations counsellor Sue White (Michelle Gomez); hapless junior doctor Martin Dear (Karl Theobald) and the irritatingly perfect Dr. Angela Hunter (Sarah Alexander).