Morrissey - 'Ringleader of the Tormentors' 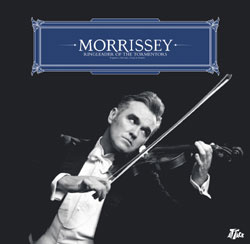 When we first met Morrissey in 1983 he asked the question, “Does the body rule the mind, or does the mind rule the body?” (‘Still Ill’, ‘The Smiths’), accompanied by the deadpan rejoinder, “I dunno”.  Even then, however, it was clear which had the upper hand in the singer’s case.  Morrissey was, and has subsequently proved to be, a strictly cerebral soul.

It is surprising, therefore, to hear him declaim, a short way into this his 8th solo record, “There are explosive kegs between my legs”. Actually, it isn’t just surprising; it is positively shocking. All that time with so little to report on the old S.E.X. front, and now this!?  Of course, with Morrissey, he sings this bawdy refrain with all the tenderness he once brought to the lines “Some girls are bigger than others”, which, almost 20 years ago, managed to be heartbreakingly profound at the same time as being killingly funny. So it is here.

How refreshing it is to have Morrissey singing about you-know-what at last!  Here we are in an industry named for a sexual metaphor (rock’n’roll), and yet we have to wait for Morrissey to get down to the real nitty gritty (to use another one).  Awash, as we are, with songs about doing it, it is hard to recall another song or singer who has dared to talk so baldly about male sexual longing.  (There may be some hair metal on the subject, but if there is it cannot have the impact of this simple line so sweetly sung).

And there’s more.  Later in the same song (Dear God Please Help Me), we hear, “Now I’m spreading your legs, with mine in between”.  Again, this is what happens between consenting adults all the time – or so they assure me - but have you ever heard anyone else sing about it so, um, graphically?  Me either. And, once heard, it is so thrillingly frank and open that you wonder why others ever bother beating about the bush.

Elsewhere, on first single, ‘You Have Killed Me’ - which despite the spin of the title is one of the most positive and uplifting things Morrissey has done - we learn, “I entered nothing, and nothing entered me, ‘til you came, with the key”. Gadzooks!  It surely trumps the usual mechanical lyrical demurrings about buttons being pushed, or fires being lit.

‘Ringleader of the Tormentors’ – which those who have heard it are identifying as one of his greatest recording achievements - is a record of a different complexion than all previous Morrissey records.  It seems somehow suffused with a new confidence and, dare one venture, happiness?  Time was when we scanned the obits for Morrissey’s imminent demise – he probably did too.  Indeed, going back to ‘Still Ill’ and all the way through to 2004’s ‘You Are the Quarry’, Morrissey resolutely hung around the cemetery gates, it being only a matter of time, and a blissful release when it comes.

Now, at the end of ‘On the Streets I Ran’, recalling a past of “turning sickness into popular song”, we find Morrissey saying hang on a minute, I might not be done yet, surely it must be someone else’s turn first?:  ‘The infirm, the newborn, the stillborn, take people from Pittsburgh Pennsylvania, take anyone, just spare me!’ Could it be Morrissey finally found a reason?

‘Ring Leader of the Tormentors’ is a savagely alive record. Recorded at Forum Music Village in Rome with long-term hero Tony Visconti (who produced favourite records for T-Rex and David Bowie, during their most creative periods of the 60’s and 70s), the album positively crackles with fire.  It is, for instance, a far more direct and rocking record than ‘…Quarry’, which aside from ‘Irish Blood, English Heart’, was a self-consciously beautiful, and largely symphonic, record.

Here, the music punches its full weight, beginning with the loud and glammy ‘I Will See You In Far Off Places’.  Slightly Bedouin in its complex and heavy musical undertow, the song teeters on the verge of being sonically terrifying, and is the first indication that ‘Ringleader of the Tormentors’ is the most musically disturbing record Morrissey has made since The Smiths second album, ‘Meat is Murder’.

This feeling of unease and of Morrissey returning to the bleak environs of his greatest early work occurs again and again throughout the album, whether on the scene of domestic hell played out in ‘The Father Who Must Be Killed’ (clue: he is), or in the queasy children’s choir intoning “There is no such thing in life as normal” on sure-fire future single ‘The Youngest Was the Most Loved’, which details the early years of a psychopath.

And then, right in the middle, to put the tin-lid on the darkness that lies at the centre of this “happy” Morrissey record, ‘Life is a Pigsty’; seven minutes in four blighted movements building towards a final, epic and unforeseen conclusion of 11th hour redemption.  OK, it’s not that happy, but it sure is both powerful and moving.

Throughout the album the lyrics have swapped some of the piss-and-vinegar that characterised ‘…Quarry’ (the lock-jawed pop stars thicker than pig shit, uniformed goons, etc), for a real emotional generosity.  ‘I Just Want to See the Boy Happy’ does what it says on the tin over a delicious horn-led glam rock racket.  ‘To Me You Are a Work of Art’ may contain the classic Morrissey couplet, “I see the world, it makes me puke”, but is essentially a paean to a rare diamond in the soggy mire.

Right at the close we get ‘At Last I Am Born’, a self-evident proclamation of the changes that have been wrought throughout this extraordinary album and, presumably, Morrissey’s life, set to a melodramatic marching rhythm and Duane Eddy guitar.  “I once thought that I, had numerous reasons to cry, and I did, but  I don’t anymore, because I am born” and “I once was a mess of guilt because of the flesh”. It’s a personal and professional triumph, which brings us back to…

‘Dear God Please Help Me’.  Orchestrated by Ennio Morricone (who has over the years made much of his significant work at Forum Music Village), this beautiful song, which for the most part simply describes walking through Rome with an unfettered heart, is almost sanctified in its atmosphere.  Yes, the lyrical content is frank-bordering-on-prurient, and yet over its six rousing minutes the song swells to almost hymnal proportions, until you feel that, for all his supposed remove from the human race, few people can deliver a universal emotional message with more power than Morrissey.

So, ‘Ringleader of the Tormentors’: at least two actual deaths, a fair few metaphorical ones, the odd petite mort, even, but overall an edifying and uplifting experience. Hail Morrissey, the new Roman emperor!

I Will See You In Far Off Places
Dear God, Please Help Me
You Have Killed Me
The Youngest Was the Most Loved
In the Future When All’s Well
The Father Who Must Be Killed
Life is a Pigsty
I’ll Never Be Anybody’s Hero Now
On The Streets I Ran
To Me You Are a Work of Art
I Just Want to See the Boy Happy
At Last I Am Born

‘Ringleader of the Tormentors’ was written by Morrissey with Jesse Tobias, Alain Whyte and Boz Boorer.  Morrissey will be embarking on a 30-date tour of Britain in April & May.

Click here to buy 'Morrissey - Ringleader of the Tormentors'.