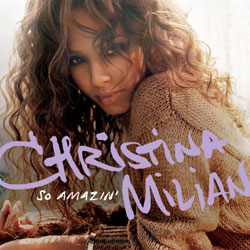 Next film role for Christina –Pulse- opening in July

Mercury Records recording artist and actress Christina Milian makes her long-awaited return to the front line with the upcoming April 24th release of her third album, SO AMAZIN’, produced in Miami by Cool and Dre.  In advance of the album release, the first single “Say I” featuring platinum rapper Young Jeezy will be released on 15th May 2006. The video shoot for “Say I” took place on location in Los Angeles, it was directed by Ray Kay (whose credits include Christina’s “Whatever U Want” and “Soldier” by Destiny's Child).

SO AMAZIN’ is the follow-up to 'It’s About Time' (June 2004), a breakthrough for Christina with more than half the songs co-written by Christina, and production by some of the heaviest hitters in R&B including Warryn Campbell, Corey Rooney, and Bryan Cox.

With SO AMAZIN’ on the horizon, Christina is also gearing up for the release of her next movie project.  'Pulse', (Weinstein Company) a horror mystery thriller directed by Jim Sonzero (War Of the Angels), and based on Kiyoshi Kurosawa’s Japanese film Kairo, is scheduled for release in July.  'Pulse' marks Christina’s 8th major film role since 1990, the most recent of which were Elmore Leonard’s 'Be Cool' (2005, with John Travolta and Uma Thurman), 'Man Of the House' (2005, with Tommy Lee Jones), video director Joseph Kahn’s 'Torque' (2004, with Ice Cube and Dane Cook), Troy Beyer’s 'Love Don’t Cost a Thing' (2003, with Nick Cannon), and Ashton Root’s 'Durango Kids' (1999, with Larry Drake).  “Singing and acting are both my passions,” she has said of her twin career paths, “and they go hand in hand.”