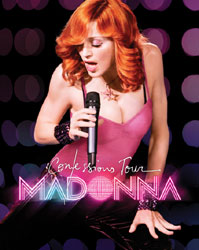 Due to phenomenal public demand, the London dates for Madonna’s Confessions World Tour have sold-out in a record-breaking 24 hours, since going on sale Friday morning at 9am.

The eagerly anticipated tour, her first since 2004’s Re-Invention, will now feature 7 shows at Wembley Arena and her first ever performance in Wales on July 30th. Originally, only 2 dates were scheduled for London, but demand was so intense that five extra dates were added the same day.

Directed by longtime Madonna collaborator Jamie King with Stuart Price on board as Musical Director, it will also feature costume design by Arianne Phillips and Jean Paul Gaultier.

Click here to buy 'Madonna - Confessions On A Dance Floor'