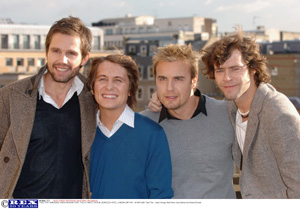 The UK’s original boyband, Take That, sold out all 26 dates of their forthcoming Ultimate Tour 06, in an amazing six hours.  In excess of 250,000 tickets were sold, including 80,000 tickets alone in their hometown of Manchester and six nights at London’s Wembley Arena.

Fans camped out at venues overnight and queued around the block, for a chance to get tickets to see Take That’s first live dates in over ten years.  The first 11 dates that went on sale , sold out within 30 minutes and due to the phenomenal demand, an extra 15 dates were immediately added.  These extra dates sold out by 4pm.

Take That – The Ultimate Tour 06 is the second biggest and fastest selling tour to go on sale in the UK this year, second only to a certain Robbie Williams.

Gary Barlow, Howard Donald, Jason Orange and Mark Owen have been overwhelmed by the response.

Gary Barlow commented:  “We’re all in shock! We have been totally amazed by the reaction. We always knew our fans were great, as they used to follow us around, but the response from them today has been overwhelming and we are so grateful for their loyalty and support. We now feel it’s our duty to give them the best night of 2006!”

Those lucky enough to get tickets for The Ultimate Tour 06 can expect to hear all of Take That’s extensive repertoire of smash hits such as 'Back For Good', 'Pray', 'It Only Takes A Minute' and 'A Million Love Songs'. Many fans will remember the explosive and creative live shows that Take That put on during their career, with outlandish costumes, pyrotechnics and perfectly choreographed dance routines. The 2006 tour promises to be no different, and will serve as a fitting tribute to their overwhelming success, and stature as Britain’s ultimate boy band.

Full dates are listed below:
TAKE THAT – THE ULTIMATE TOUR 06


Names In The News Archive