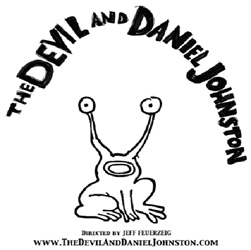 Daniel Johnston, manic-depressive genius singer/songwriter/artist is revealed in this portrait of madness, creativity and love.

'The Devil and Daniel Johnston' is a stunning portrait of a musical genius who nearly slipped away.  Director Jeff Feuerzeig exquisitely depicts a perfect example of brilliance and madness going hand in hand. Because he is an artist suffering from manic depression with delusions of grandeur, Daniel Johnston's life is marked by wild fluctuations, numerous downward spirals, and periodic respites.

As a reclusive teenager, Johnston began showing signs of unusual artistic ability.  He created intuitive Super- 8 films and expressive comic book-style drawings in the basement of his family's home.  In the eyes of his fundamentalist Christian family, however, he simply wasn't contributing to society in a useful or productive way.  After running off and joining a carnival, Johnston landed in Austin, Texas, broke and alone.  It was there he began to hone his musical career, managing to secure a brief spotlight on MTV with the help of a timely break.  Just as he was beginning to make a local name for himself, however, Johnston's inner demons began to surface.

If you would like to watch the trailer please select your preference below:

To get the tones:

Text DANIEL to 83239 for free Real & Polyphonic 'The Devil And Daniel Johnston' Ringtones.

You will be charged the cost of a standard SMS when ordering your free tone (by your Network, and at your Network's standard costs). Please check your phone is compatible with Polyphonic and Real Tones before ordering, more information can be found at the WAP site which will be sent back to you when you enter.

You may also receive other free offers/SMS updates from Tartan Films after using this service - if you want to stop receiving free updates/offers text STOP to 83239 or email support@mobiq.tv