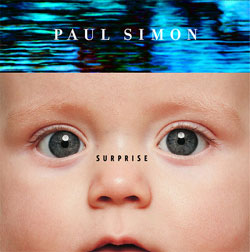 One of the world’s most renowned singer/songwriters Paul Simon returns with the timeless quality of his new album 'Surprise' that is scheduled for a UK June 5th release on Warner Bros. Records.

'Surprise' is the first album that Paul Simon has worked on in collaboration with legendary producer Brian Eno. The result is a captivating collection of songs captured in mesmerising style by Eno’s inventive production. 'Surprise', his first album since 2000’s ‘You’re The One’, is reminiscent of classics from his back catalogue such as ‘Paul Simon’, ‘There Goes Rhyming Simon’ and ‘Still Crazy After All These Years’.

Titles set to rank amongst highlights of the set include ‘Outrageous’, ‘How Can You Live In The Northeast’ and ‘Sons And Daughters’.

There are tentative plans for Paul Simon to plan an intimate show in London around the release of the album. Details of the show will be announced when and if they are confirmed.

Paul Simon’s activities since the release of ‘You’re The One’ have included stadium shows with former partner Art Garfunkel and the release of a nine-disc box set entitled ‘The Studio Recordings 1972-2000’. He also earned an Oscar nominated for the song ‘Father And Daughter’ that featured in the animated hit ‘The Wild Thornberrys Movie’.

The song titles to "Surprise" are:

Paul Simon is also set to play at the New Orleans Jazz & Heritage Festival on May 7th.