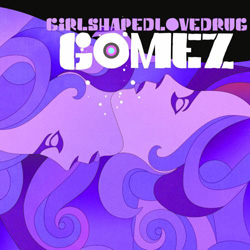 The LP 'How We Operate' Released June 5th

Celebrating their tenth anniversary this year with a 9-date UK tour and a series of festival dates, Gomez return on May 29th with 'Girlshapedlovedrug'  - the poptastic first single from their fifth studio album 'How We Operate', released on Independiente Records, June 5th.

One of the many highlights from the forthcoming LP, the new single is a carefree, summery tour de force for the British quintet and was co-written by the band - Ian Ball (lead vocals, guitar), Ben Ottewell (vocals, guitar) Tom Gray (vocals, guitar, keyboard) Paul Blackburn (bass) and Olly Peacock (drums).

Both the single and the LP were produced by Gil Norton, the band's first outside producer, whose previous credits include The Pixies and The Foo Fighters. "I've been a crazy, huge Pixies fan my entire life, since I was thirteen," says guitarist Tom Gray, and over a shared love of Everton football club, the new, revived sound of Gomez was born.

"The last album was pretty rocking, and reflected the live show a lot" says guitarist Ben Ottewell. "With this one, we wanted to focus on songs, melodies and words, rather than volume."

Fresh from a US tour, Gomez will play nine UK dates this summer including a show at London's Shepherd's Bush Empire on June 14th, plus a number of festivals including V, Scotland's T in the Park and Ireland's Oxegen.

Choose your preference below to watch the video for 'Girlshapedlovedrug':