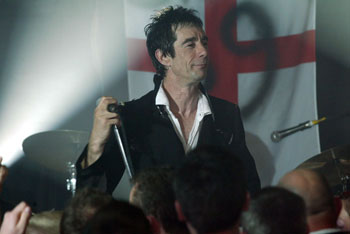 The People’s Anthem – ‘Hurry Up England’

Sham 69 front-man and singer of the track ‘Hurry up England’ Jimmy Pursey said: “We are all very, very happy. This country loves us like we love our country and we are going to make sure that we not only have a number one record – we are going to win the World Cup.”

The song was recorded at the Olympic Studios, London.  Blur guitarist Graham Coxon joined the line-up, playing guitar alongside Sham 69's Jimmy Pursey on lead vocals on the track.  The guys took direction from world famous producer Stephen Street who said of the track “I wanted to get a bit of the verve and power that the original Sham 69 track had. I love the new lyric that Jimmy’s got and think it fits really well so that when the fans are out there and they hear it coming through the PA and the stadium they really get behind it.”

The single is set to be released on Parlophone on the 12th of June. A donation from sales of the single will be donated to Roger Daltrey’s charity, the Teenage Cancer Trust.

The single is available on 2 track CD or limited edition 7” picture disc, and as a digital download.