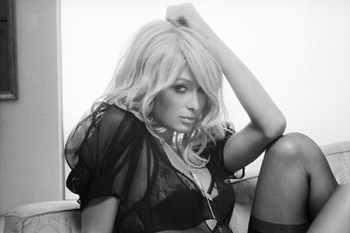 To watch the video for 'Stars Are Blind' choose your preference below:

The single ‘Stars Are Blind’ is set for a July 31st release date whilst her eponymous album will follow a week later on Warner Bros. Records.

Amongst the tracks vying for inclusion on the collection are ‘Screwed’ (a possible follow-up single), ‘Nothing In This World’, ‘Jealousy’, ‘Turn It Up’, ‘Not Leaving Without You’ and ‘Turn You On’. The track ‘Fightin’ Over Me’ features guest appearances from Fat Joe and Jadakiss whilst two remarkable covers are also included in the shape of Rod Stewart’s ‘Do You Think I’m Sexy?’ and Blondie’s ‘Heart Of Glass’.

Paris Hilton spent two days on a beach in Malibu, California, shooting the video for ‘Stars Are Blind’ with director Chris Applebaum with whom she previously collaborated with for the Carl’s Jr. campaign. Applebaum’s previous music video credits include Rihanna’s ‘S.O.S.’ and Natasha Bedingfield’s ‘Unwritten’.

Paris will head to Europe and the UK for a promo visit at the end of June. Further details of this will be announced as they’re confirmed.