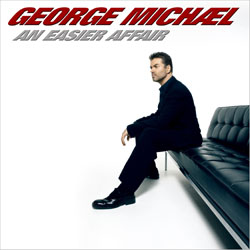 Following the incredible reaction to his forthcoming sell out 25 Live Tour, singer/songwriter George Michael is to release his brand new single ‘An Easier Affair’.

Co written and produced by George Michael, the upbeat new single (released by AE Aegean / SONY BMG) is available as a digital download now and in the shops on the 3rd of July with the bonus track ‘Brother Can You Spare A Dime’ originally featured on George Michael’s ‘Songs From The Last Century’ album.  This new version was recorded live during a special performance at the Pavarotti Concert in Modena.

George Michael has been British pop royalty ever since he took the charts by storm with Wham! in 1982.  He's been a solo star for over 20 years achieving huge international success, selling over 80 million records worldwide, from hits like 'Faith' to his most recent acclaimed album 'Patience' and has since been hailed as the Most Played Artist on British Radio in the last 20 years!!

In September this year, George Michael will kick start his highly anticipated European 25 Live Tour - his first in 15 years – where in the UK alone, avid fans snapped up the tickets within the hour!  The tour debuts in Barcelona on the 25th September and reaches our shores on the 17th November, opening in Manchester. This spectacular show will call on Glasgow, Birmingham, Dublin, Earls Court and Wembley.

‘An Easier Affair’ is available now as a digital download with a physical release on the 3rd of July with bonus track ‘Brother Can You Spare A Dime on AE Aegean / SONY BMG.