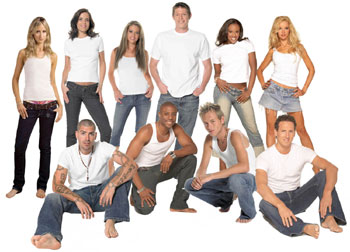 Back on the beaches with our new batch of Love Islanders

'Love Island' is back with a brand new group of celebrities, all heading for the luxury of Fiji where they’ll compete to be this year’s Love Island golden couple.

Some of the most eligible and desirable single celebrities are packing their best bikinis and sexiest swim shorts for the series that starts Monday, July 10 on ITV1, with 'Love Island: Aftersun' on ITV2.

The girls who will be taking part are:

The boys taking part are:

Chris Brosnan - a writer, producer and the son of Pierce Brosnan; dancer Brendan Cole; Leo Ihenancho from band The Streets; Shane Lynch of Boyzone; and Lee Otway of Hollyoaks.

Presenter Patrick Kielty returns to Fiji with a brand new co-host, the fantastic Fearne Cotton. Fearne says: “It’s the best job! I’ve never been to Fiji so I’m really excited; I love travelling and I love the sun - it’s perfect!”

This year the show promises more twists and turns as our celebrities look to prove they’re worthy of the viewers’ vote as well as a place in a fellow contestant’s heart.

Whether they fall out or get on, it’s the viewer who will play Cupid, deciding which couples get the chance to know each other a little better and which celeb will be on the next plane home.

Executive producer, Rachel Arnold says: “Even in a paradise location like Fiji our celebrities won’t be safe from a few surprises. But we’ll be keeping them all under wraps until the last minute.”