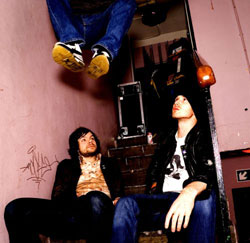 Summer's here and the time is right for dancing in the streets...TO THE SOUND OF THE MOTORETTES!

Boys from the Beach (Tynemouth) , inspired by The Shirelles, The Ramones, The Ronettes, Kim Fowley, Phil Spector, TRASH POP! The Motorettes bring you this summer's soundtrack.

The album replete with an array of infectious , hook laden nuggets comes on strong from the off with the band's debut single 'Superheartbeats' before careering down their self made avenue with a potent mix of rock and roll and  trash pop asthetic...'You Gotta Look The Parts', the follow up to 'Super Heartbeats' more than continues that ascendancy. Along the way The Motorettes appear to find is frightenly difficult not to write an instantly memorable tune, be it the winsome beauty of 'I Hate To See You Cry' or 'Heart...stop..ing'  back to back with the anthemic might of 'Go! Go ! Gadget Girl' and 'I Am Blisters...'

Oh, and yes 'I'm On Fire' is their version (on speed) of the Springsteen classic!

'The Motorettes', the album is available on CD and vinyl at all good stores countrywide from the 31st July.

Meanwhile The Motorettes have confirmed the following live appearances with Kubichek! with whom they release a ltd split 10" ep on July 10th...

To watch the video for 'Relax It's The 80s' choose your preference below: