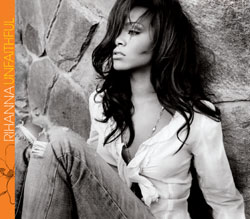 Bajan Beauty To Release New Single And Perform At G-A-Y!

Having already provided one of the records of the year in the shape of ‘S.O.S.’’s sublime slice of pop heaven Rihanna is all set for another assault on the charts with a new single taken from her gold album ‘A Girl Like Me’. On the 17th July 2006 Def Jam release ‘Unfaithful’.

Having burst onto the scene in 2005 with last summer’s dancehall flavoured anthem ‘Pon De Replay’, Rihanna released her second album, ‘A Girl Like Me’ in April of this year. The standout ballad from that album is her new single‘Unfaithful’. The song was written for her by label mate Ne-Yo (who recently reached #1 in the UK with ‘So Sick’) and produced by the Norwegian hitmakers Stargate. On ‘Unfaithful’ Rihanna’s voice shows a maturity beyond her tender years as she documents the destruction that infidelity can bring to a relationship. The powerful video has already topped both The Box and The Hits charts whilst both Radio1 and Capital have put the song on their A-List and Radio2 added it to their B-List. With ‘Unfaithful’ Rihanna confirms her arrival as a superstar artist.

It’s shaping up to be a big year for Rihanna. In addition to her records she has an endorsement with Nike, she is the face of Barbados for the country’s tourist authority, is fronting the Miss Bisou line for US retail chain JC Penny and look out for Rihanna’s movie debut in her cameo role in 'Bring It On 3'.