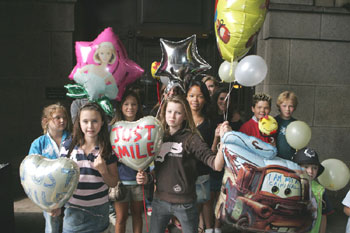 Fans of 12 year-old singer/songwriter Amy Thomas protested outside the headquarters of the British music industry yesterday following a decision to ban her from a new schools’ chart because of her views on downloading.

A flash mob of 50 children appeared outside of the office of the British Phonographic Industry (BPI) for 15 minutes holding balloons with messages of support for the young singer.

Amy was chosen as one of the ten artists for the My Music chart that launches in October across 1,400 schools. Her inclusion was then blocked by the BPI once it discovered she is signed to Flowerburger Records, a new independent record label behind an online petition opposed to the BPI’s solutions to piracy of suing music fans who use p2p websites.

This minor music industry spat would have gone unnoticed but for Amy writing about it on Bebo, a social networking website for school kids, whose members are now encouraging each other to boycott the My Music chart in favour of Amy’s debut single, Just Smile, which is released the same week as the schools’ chart.

Holding a balloon with Just Smile written across it, Amy was asked if she thinks it is ok to download music from the internet for free.

“All my friends do it”, she replied “It just seems like the natural thing to do”