The Lives Of The Saints 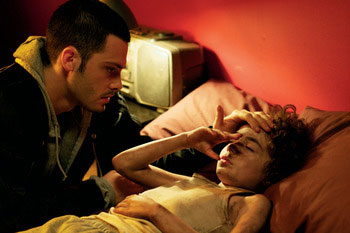 The Lives of the Saints is a gutsy exploration of modern day morality.  Shot entirely on location in London’s Green Lanes it depicts the power stuggles within the hierarchy of the community when a little angel appears and challenges the dominance of Karva, the aggressive gangster.

When Runner, an errand boy for Karva and his stepson Othello, discovers a small silent boy who appears to fall from heaven, the lives of those around are offered a glimpse of the future simply by looking into his eyes.  It is at first difficult to reconcile the gritty reality of the streets with the mystical force that of the innocent oracle, and in this respect I don’t think the average cinemagoer can associate with the film.  However, as the plot progresses Rankin and Cottam effectively explain that the characters’ belief in the boy is a manifestation of their desire to have a belief in something, anything that gives them hope.

Othello soon realises he can use the boy’s gift to feed his gambling habit, and news of the ‘angel’ spreads across the community.  The oracle brings them instant happiness, however this only serves to inspire jealousy and greed, as those who had nothing suddenly have something.  The excellent casting of both Karva (James Cosmo) and Othello’s sidekick Emilio (Bronson Webb) gives these troubled characters depth and meaning on their quest for happiness and social recognition.

The film is not dark and gruesome, however there are some violent moments of menace from Karva and his heavies.  James Cosmo excellently conveys the intimidating and unpredictable nature of such a angster, which is cleverly reinforced by the intense cinematography.  The fear is tangible as close-ups focus on him brandishing knives and hissing threats into the ears of those who cross him.

The rather shocking conclusion sees Emilio rashly murder the innocent boy followed by his own dramatic suicide.  This climactic ending makes the film the success it is.  The plot lacks direction at times, however the concluding scenes burst the mystical bubble bringing the question of morality back to the foreground.

However, the premise still remains unanswered; what really brings happiness?  The community returns to the normal daily grind with the hierarchy of violence restored, and the angel of paradise is never mentioned again.  The cynic in me questions whether there ever was an angel who touched their lives, and the pessimist concludes that a glimpse of paradise causes more harm than good.  If you persevere with the gangster meets mystical basis of this film your efforts will be well-rewarded with a rounded exploration of morality, power and happiness that will leave you still wondering as the credits roll.