Jack Johnson - 'In Between Dreams' 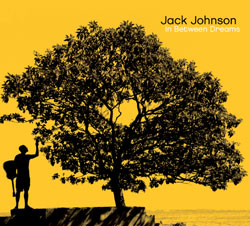 Hawaii's Jack Johnson is proof that word of mouth is still one of the best ways to promote your album. 'In Between Dreams' had a quiet release back in 2005 and in less than 12 months has sold more than 700,000 copies in the UK alone. Johnson has found even more fans since winning Best International Breakthrough at the 2006 Brit Awards.

After listening to 'In Between Dreams' it is clear why Johnson has become so popular. His style is laid-back, acoustic, feel-good tracks. It's the kind of album everyone needs in their collection to relax to. The opening track (and current single) 'Better Together' is simply gorgeous. Johnson's deep vocals melt with the acoustic guitar with impressive results. 'Better Together' is destined to be a song shared between many loved-up couples across the world. Stand-out tracks include 'Crying Shame', 'Staple It Together' and the singles 'Good People' and 'Breakdown'. Each track is a perfectly crafted piece of acoustic perfection.

Johnson does vary the pace at times and some of the tracks have a rockier edge ('Crying Shame' being one such example) but for the most part 'In Between Dreams' is a chilled-out, laid-back affair. You can almost feel the sun on your back as you sit on a Hawaiian beach as you listen to the album. I felt a bit jealous of Johnson's surfer lifestyle. From the sound of the lyrics Johnson is a guy who loves his life and has a passion for his music.

'In Between Dreams' is an enjoyable album. The more you listen to it, the more it grows on you. Some have criticised Johnson for being a bit samey but I disagree. When the music is this good surely you can't go far wrong. If you're in the mood for some good honest music or you just need to chill out, pick up a copy of 'In Between Dreams'.

Click here to buy 'Jack Johnson - In Between Dreams'