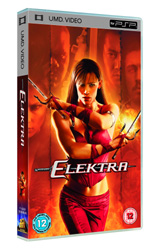 'Elektra' sees Jennifer Garner reprising the role she first portrayed in the critically mauled 'Daredevil'. In this spin-off movie Elektra has been resurrected (she died in 'Daredevil') and now makes a living as a hired assassin. When Elektra takes on her latest assignment to kill a father (Goran Visnjic) and his teenage daughter she realises there is more to the job than meets the eye. Elektra must do everything in her power to protect them from the mysterious organisation The Hand and learn their secret in the process.

Upon it's cinematic release 'Elektra' was universally criticised. It was with this in mind that I watched the movie and by the end, I have to say, I can't understand the negative reviews. Sure 'Elektra' isn't a comic-book movie in the same sense at the mighty 'Spider-man' franchise but it is a good addition to the Marvel adaptations. I found the film intriguing, entertaining and exciting. The fighting sequences were impressive as were the special effects.

The best thing about the movie is without a doubt Jennifer Garner. She smoulders and slinks across the screen and injects depth into the character. Garner has already proved her acting chops in the fantastic TV series 'Alias' and it's a real delight to see her leading a movie. Garner plays complicated well and she fits Elektra like a glove. She convinces throughout as a tortured soul and she really throws herself into the role.

The UMD contains a wealth of bonus material and makes 'Elektra' a great value purchase. The picture quality and sound is magnificent and 'Elektra' really pushes the UMD format forward.

'Elektra' is a fun movie. If you are looking for an action packed 90 minutes then 'Elektra' is perfect. Fans of the comic-books should find plenty of backstory in the film to keep their attention. To be honest most viewers will be mesmerised by Garner's performance. I can't wait to see what she does next. If rumour is to be believed a more adult storyline is being developed for a possible sequel. Let's hope this does see the light of day.