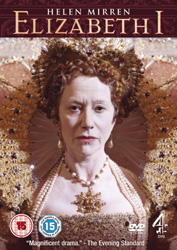 This two-part television drama tells the story of Elizabeth the First, the legendary Virgin Queen, from twenty years into her reign until the end of it.  The drama spans three and a half hours, and despite the epic nature of historical events going on, it is the personal stories and conflicts that are brought to the fore.  The result is an intense period drama that feels fresh and vibrant, and is both visually stunning and superbly acted.  It is more historically accurate than ‘Elizabeth’, the Cate Blanchett film of the late nineties, and explores more fully the relationships the Queen had with the ambitious traitors and loyal aides that made up her council.

Such tempestuous times certainly make great drama, with England’s Protestant throne under constant threat from global Catholic forces.  There are plenty of plots to remove the Queen after the Pope decrees it just in the eyes of the Lord for any Catholic to murder Elizabeth so that she can be replaced by her disowned Catholic half-sister Mary, “Queen of Scots”.

The core to the appeal of this serial is Helen Mirren’s mesmerising portrayal of Elizabeth.  An extraordinarily talented and much lauded actress, here she is so believable that, disguised by make-up and costume, it is easy to forget that you are watching a performance. Mirren portrays the queen as an impassioned, articulate, intelligent and strong woman, living by her wits and strength of personality in a male-dominated court; only occasionally, and usually effectively, resorting to high emotion and tears, thereby embarrassing the council into submission to her will.  Here, however, she benefits from a supporting cast containing some of the finest names in British acting. Jeremy Irons, as superb as always, gives a slightly less understated performance than one might normally expect from him as the charismatic Robert Earl of Leicester, the handsome first love of the Queen’s life; destined never to marry her.  Their scenes together are a joy to watch, so perfectly do their talents complement each other.

The Queen’s councillors are played by the cream of British acting talent.  Ian McDiarmid, much lauded Shakespearean actor and more famous as the Emperor in the ‘Star Wars’ films, plays the old trusted aide Lord Burghley.  Rather more able to get his hands dirty as the Spymaster general Sir Francis Walsingham, is Patrick Malahide (who is currently starring alongside Jeremy Irons in the brilliant ‘Embers’ at the Duke of York’s).

The drama suffers the occasional reality check with some fairly clunking expositional dialogue, in the style of “So, the Spanish Armada is on its way, then?” which announces the imminent attempted Catholic invasion.  The intensity of the epic historical drama reaches its climax at the end of the first episode, when through the mist glide English ships, signalling an end to the threat and the vanquishing of the Spanish – how differently the course of Western civilisation could have run had the result gone the other way could be infinitely debated.  Sadly, here we also lose Jeremy Irons’ Robert of Essex, succumbing to his battle wounds, but nobly dying in the grief-stricken Queen’s arms.

Yet no sooner is Lord Robert buried and the second episode under way than Elizabeth is leading on his stepson, Robin of Essex, thirty three years her junior, ably played by handsome leading man Hugh Dancy.  This is where the tone of the storytelling shifts from the great historical events to the personal.  Mirren plays her lust for the young man like a schoolgirl’s first crush, constantly referring to Robin as her “lapdog”.  The plot weighs down a little with repetition of Robin overstepping his position causing the queen to fly into a rage, only to immediately forgive him and remind him of her love; thus setting him up for another fall.  Each time he fails or incurs her displeasure, Robin falls a little further, and this sets up the emotional climax when Elizabeth is forced to choose between forgiving Robin for abusing his position as General of Ireland and illegally consorting with the Scottish king, or putting him on trail for treason, which, given his enemies at court, could only have one outcome…

As the drama progresses, Mirren’s performance matches the Queen’s increasing ill-health and age, but so compellingly human is her portrayal of the complex monarch that it is impossible to ever lose sympathy for her.

This is gripping and engrossing historical drama perfectly pitched for the television and beautifully made.  This is an Elizabeth the First so far removed from the figure of stultifying history lessons that it could hold the attention of a very mixed audience, and should endure, not just in classrooms, but in the minds of television audiences, as a perfect slice of British period drama.