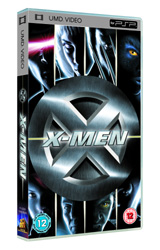 'X-Men' was released in 2000 to critical acclaim. It began the re-invention of the comic book movie after 'Batman & Robin' almost killed the genre. The film follows the story of Logan (Hugh Jackman) and Rogue as he comes to terms with his unique powers and discovers others like himself. Taken in by Professor Charles Xavier (Patrick Stewart), Logan joins the fight against Magneto (Sir Ian McKellan), a mutant intent on war with humans. Along the way the X-Men must fight prejudice from the US senator (Bruce Davison) as he tries to single out the mutants in society by forcing them to reveal themselves.

The movie tries to be many things throughout it's running time. It is part action movie, part blockbuster and tries to comment on the issue of prejudice in America. The movie succeeds in parts but the whole thing feels like a build up to the sequel (which is incidentally a much stronger and more satisfying movie). The characters are developed to a point but there are so many different characters to try and squeeze into the movie that some of them fall by the wayside. Jean Grey (Famke Janssen) and Storm (Halle Berry) get quite a bit to do but characters such as Cyclops (James Marsden) seem to be there purely to keep comic book fanatics happy.

'X-Men' is an enjoyable movie and after rewatching it since seeing the sequel, I've appreciated it more. Hugh Jackman carries the movie as Wolverine. 'X-Men' is the movie that really brought him to the attention of movie-goers and it is the role he's had the most success with (hence why he is returning in the third installment due out in a few weeks). He plays the brooding, tortured soul very convincingly and manages to bring out different sides of Wolverine throughout the movie.

The UMD includes several deleted scenes and a brief featurette. The most exciting extra is the trailer for the upcoming 'X-Men 3', which looks fantastic. The extras as a whole are a nice bonus.

The best way to treat 'X-Men' is as a lead-up to the sequels. Many of my friends would say the first 'X-Men' is the best but I simply don't agree. The movie is adequate and entertaining enough but it doesn't have the depth of the sequel. If you love comic book movies then check it out, the effects are impressive and the film fills in a great deal of the X-Men's history. To fully appreciate it, I recommend watching it again after you've seen the sequel.