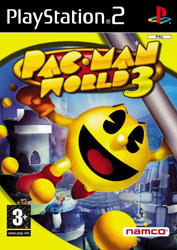 'Pac-Man World 3' is released to coincide with Pac Man's 25th anniversary. The game stays true to the original idea of 'Pac-Man' and features many of the gaming icon's trademarks. The major difference is that 'Pac-Man World 3' has a storyline. The game begins with Pac Man being mysteriously transported away from his family on his birthday. He reappears in a mysterious world and soon realises he must uncover Erwin's evil plan and save the world before it's too late.

'Pac-Man World 3' is great fun. It feels surreal to be guding Pac-Man as a 3D character. The basic gaming elements are the same as always. Pac Man must be guided around eating Pac-Pellets and collecting fruit whilst trying to avoid the ghosts. As expected there are certain pellets that Pac-Man can eat to allow him to eat the ghosts and make the level a bit easier. The major change in the game is the 3D setting and Pac-Man's abilities. The surroundings used in the game are interesting and eye-catching. It feels similar to other recent platform games such as 'The Incredibles: Rise Of The Underminer' and fans of games such as this will no doubt lap 'Pac Man World 3' up. Pac-Man's abilities now allow him to put up more of a fight. He can jump, body slam and punch; things he could never do in the original 2D game. As you progress through the game you get the opportunity to control the ghosts, Pinky and Clyde. This is a nice touch and adds a new dimension to the game.

My favourite part of the game is the ability to go back and play 'Pac-Man' as it was originally released. To do this you must collect certain icons and these take you away from the main game and let you indugle in a bit of Pac-nostalgia. It is a timely reminder of how iconic 'Pac-Man' is in the world of gaming. He is a true legend.

My main problem with the game is the feeling of repetition. I acknowledge that I am not likely to be the target audience for the game. It is clearly designed for the younger gamer and should offer them plenty of fun and entertainment. The game feels a bit easy at times and it doesn't require too much thought. After you've completed a few levels you do begin to feel you are doing the same thing over and over with different backgrounds. This did spoil the fun a bit for me but I still enjoyed playing the game very much.

A nice addition to the game is the Museum special feature. In this area there is a brief interview with Toru Iwatani but more exciting is the original 'Pac-Man' game. It's a real trip down memory lane and I felt like a child all over again. There is just something so wonderful in its simplicity.

'Pac-Man World 3' should provide enough entertainment to keep you hooked until you complete the game. If you're a fan of the 'Pac-Man' series then you'll love the game and probably overlook its frustrating flaws. Whichever way you look at it, 'Pac-Man World 3' is a solid platformer and definitely one that younger gamers will delight in.