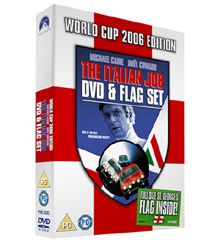 What can anybody possibly say about ‘The Italian Job’ that has not been said already?  Its status as a British film classic, a cult favourite, and an enduring slice of swinging sixties brilliance precedes it.  Watched in company, you can guarantee that everybody will have their favourite bits, but there will be a chorus for the catchphrase, “You’re only supposed to blow the bloody doors off!”

For those few who don’t know, criminal mastermind Mr Bridger (Noel Coward) plots and oversees the theft of millions of pounds worth of Italian gold bullion from his prison cell in England.  Crook Charlie Croker (Michael Caine), fresh out of prison, is enlisted to guide a team to Turin to intercept the gold and drive it back to England.  It sounds quite silly, and it is, but this is a film that plays its strengths to its advantage.  With a superior cast and a script from Troy Kennedy Martin (who wrote for many landmark British television shows and penned the superior conspiracy thriller ‘Edge of Darkness’), the talent was available to make this the best film it could possibly be.

Tying in a DVD release with the World Cup 2006 is a clever marketing strategy, as included in the special edition is a St George’s Cross flag.  Set during the backdrop of World Cup competition, with England supporters omnipresent in the Italian locations, the rogues who attempt the ‘job’ do so under the guise of travelling football supporters, though the damage they wreak in Italy is rather more skilful and admirable than the usual behaviour of England fans abroad.  You cannot help but root for the gang as they continually outwit the blundering Italian police force and mafia to make off with the booty.  With rousing songs such as ‘The Self-Preservation Society’ accompanying the action, it’s one of the few feel-good British films capable of rousing a smattering of patriotism in the most despondent if citizens.

A large part of the appeal of this film is the central performance from Michael Caine.  Proving that he is equally as adept at comic timing as he is playing the tough leading man, his performance oozes charm and wit.  With his star very much in the ascendancy at the time, this film planted him firmly in the ‘hot property’ bracket.

Unlike the rather po-faced remake, the original plays it for laughs from the start.   Contemporary audiences would have been well aware of this from the casting of Noel Coward as a criminal mastermind gangster and John Le Mesurier (then well-known to television audiences as Sergeant Wilson in ‘Dad’s Army’) as the prison warden. In one memorable sequence, recently released Croker breaks back into the prison to speak to Mr Bridger, before escaping again.  Add to this Benny Hill playing a bumbling “professor” obsessed with fat women – and you have all the essential ingredients of the great British comedy.  Watch out also for a very young Robert Powell.

The real stars of the film are the Mini Coopers (British made at the time) that the gang use as getaway cars (coloured red, white and blue of course), which provides the climactic sequences and some of the most skilful stunt car driving committed to film.

This very English film has wide appeal, and those few who have never seen it, should take this opportunity of investing in the special edition.  Go on, it’s World Cup time, treat yourself!