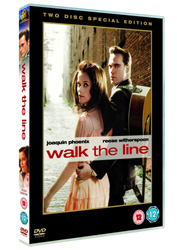 This film is a biopic charting the first half of the life of legendary country star Johnny Cash.  The story starts with the twelve year-old Johnny being raised on a cotton farm in Arkansas during tail end the Great Depression in the early 1940s.  His father, a study in paternal distance from Robert Patrick, never forgives Johnny for the accidental death of his elder son Jack; and although it was not his fault, his closeness to his brother leaves Johnny feeling the guilt of his death for the rest of his life.  With his tyrannical father constantly reminding him that he is nothing, Johnny seizes the first opportunity to leave home by joining the air force; and he is soon stationed in Germany where his interest in music burgeons.

When Johnny comes home, he marries his sweetheart Vivian, but it is clear from only a few brilliantly sublime scenes that they are polar opposites.  When she demands that he gives up his fanciful musical ambitions and encourages him in his amusingly short-lived career as a door-to-door salesman, you know that this marriage is not destined for longevity; but the two stay together for the sake of their children.  When Johnny cuts his first disk and his favoured career grows, Vivian supports him as he is able to supply the American Dream of a big house and plenty of money to support the family.

The adage that sums up this film is that the one thing worse than not getting what you want is getting it.  Cash soon goes from strength to strength, his popularity and stardom soaring as he tours with his band; but this puts an irreparable strain on his marriage.  He falls in love with June Carter, but she is also married, and remains reluctant to have an affair.  Spiralling down into drink and drugs, with a subsequent scandalous arrest, the out of control Cash sees his tour cancelled, and his wife and children leave.  Having hit rock bottom, only June Carter shows Cash enough faith and love to drag him out of his personal hell.

Core to the appeal of this film is the two central performances by Joaquin Phoenix and Reese Witherspoon as Cash and Carter.  Phoenix is utterly compelling throughout as the self-destructive star; oozing cool; his Cash-like mannerisms never forced.  He is ably supported by Witherspoon in an Oscar-winning performance.  James Mangold’s direction is very intimate, and especially well-handled are the touring scenes, where any notion of the glamour of fame is brutally cleansed away.  The abiding image is of a cramped tour bus and one smoke-filled hall after another for weeks on end.

Johnny Cash fans will probably love this faithful retelling of his life, based as it is on his own memoirs.  Fans of popular music history will also revel in the history-in-the-making story, with greats such as Elvis Presley and Jerry Lee Lewis appearing as characters.  The soundtrack is superb, and accompanies almost every scene, sometimes using a complete song to move the story forwards.  The deeply personal tale may however leave the casual viewer cold, as it is rather more difficult to engage with the characters and their stories without having a vested interest in them or the musical period.  Indeed, it is difficult to see the film working if it were not a biopic, as the chaotic nature of people’s lives are never structured in the easy-to-follow Hollywood story standard; but as a biopic it ranks as one of the very best.  One can’t help but feel that the late, great Johnny Cash himself would approve.

Celebrities Worldwide Rating: 8 out if 10

Click here to buy 'Walk The Line' on DVD