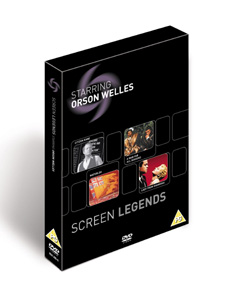 This new release contains four wonderful films featuring the legendary actor, director and producer Orson Welles.  Strangely enough, Welles only prominently features in ‘Citizen Kane’ and ‘The Lady from Shanghai’.  If you are considering buying this box set just to see Orson Welles, be warned that he appears as a guest star cameo in only three scenes during ‘A Man for All Seasons’ and ‘Waterloo’ combined!

When you think of Welles; you think of ‘Citizen Kane’.  This monumental film, first released in 1941, threw the precocious twenty-five year old into stardom and set his place in movie history forever.  As a previously untried director, Welles was allowed the freedom of experimentation, and that was an opportunity he grabbed with both hands.  Whether you think ‘Citizen Kane’ the greatest film ever made, or a showpiece of special effects, you would still agree that it is visually stunning and feels fresh, vibrant and masterly.  It is a wonderful achievement for the up-and-coming talented young actor/director and the story, the life and death of media tycoon Charles Foster Kane; with his dying word “Rosebud”, harking back to the happy innocence of his childhood; is a fascinating study of a man consumed by his own ambition.  At the time, the film was poorly received, making it a commercial failure and costing the studio a lot of money; but more crucially, their faith in Welles’ abilities.  He went on to make ‘The Magnificent Ambersons’ and ‘A Touch of Evil’, both now considered masterpieces, but they also failed to make any money after their initial releases despite the studio’s interference in the productions.

The second film in this box set, ‘The Lady from Shanghai’, is also directed by Welles, who stars alongside Rita Hayworth (who was unhappily married to Welles at the time) in this clever thriller.  It is very well documented, but never again after ‘Citizen Kane’ would Hollywood moguls allow Welles to maintain creative control over his films, as they were terrified this innovative genius would lose the studio money if audiences failed to understand Welles’ creative vision.  Thus, with all his future ventures, Welles’ story-telling genius was stifled by the ultra-conservatism of the Hollywood system, and unfortunately the meddling is evident in all his subsequent American films, including this one.  The film, whilst a little patchy, is still a brilliant piece of work, and worth seeing just for Welles’ unusual Irish accent and Hayworth’s powerful performance as an unhappy wife.

Eventually, Welles gave up on Hollywood and took his film-making to Europe, an environment where traditionally the director is allowed to keep full creative control of his projects.  I would have liked to have seen some of Welles’ later films that he directed and starred in during this later period of creative freedom, such as ‘The Trial‘(1961) or ‘The Immortal Story’ (1968) included in this release; but instead we have two of his later films in which he was cast as a high profile guest actor, where his involvement in the production was no greater than a small bit part.

He is magnificent as Cardinal Wolsey in ‘A Man for all Seasons’.  He is both amusing in his fawning desire to please the king and threatening in his uncompromising approach to the stubborn Thomas More.  It is Wolsey who makes the decision to support the king over the pope that creates the moral dilemma for Thomas More.  This film is compelling because of Paul Schofield’s immaculately observed central performance as the defiant More; and features an array of wonderful character actors such as Leo McKern, Robert Shaw and a very young John Hurt.

By the time of ‘Waterloo’ (1970), Welles was the natural choice to play the French King Louis XVIII.  By now suddenly old and incredibly obese, it is hard to believe, and sad to realise, that the Welles in ‘Waterloo’ is the same man who made ‘Citizen Kane’ only three decades earlier.  Again, his performance is perfect as the lazy, pompous, fat and decadent king who is deposed by the Emperor Napoleon (newly escaped from exile) much to the delight of the French nation.  The rest of the film recounts the impending conflict the ambitious Napoleon creates with his military campaigns; until England’s own Arthur Wellesley, the Duke of Wellington, steps up to stop him at Waterloo.  Rod Steiger and Christopher Plummer are wonderful as arch-enemies Napoleon and Wellington, but after a promising opening, the film descends into a fairly turgid and over-long retelling of the battle of Waterloo.  Contemporary audiences will be familiar with much slicker battle sequences from series such as ‘Sharpe’, but here the last hour of the film is a bit like watching an amateur re-enactment society in comparison, and is easily the weakest film in this box set.

Having said that, all four films are of a high standard, and whilst Welles made better films after ‘Citizen Kane’ than those represented in this release, he was never again allowed to reach the heights of his very first film.  This release is worth buying for ‘Citizen Kane’ alone: for the rest, just enjoy the highest imaginable calibre of acting.