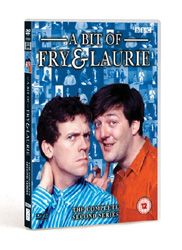 This second series of comedy gold from the enduring partnership of Fry and Laurie is as much of a joy as the first; and contains another six thirty-minute episodes of sketches.

Every episode is a delight from start to finish.   It is startling to see Stephen Fry and Hugh Laurie, now internationally renowned for their mature wit, skilful film direction (Fry’s ‘Bright Young Things’) and fine acting (especially Laurie, now enjoying critical acclaim and sex-symbol status as the star of the hit TV series ‘House M.D.’) in their comedy pomp; grimacing, wearing silly wigs and (very often) dressed as easily offended middle-class ‘Daily Mail’ reading women.  But, believe it or not, this is how the duo was known to the nation throughout their early careers; as this series, and supporting roles in the concurrent 'Blackadder', burned their extraordinary partnership into the national psyche and earned their place among the greats of British comedy.

There are a few much-loved characters that return from the original series.  There’s Control and Murchison, two colleagues high up in British Intelligence.  “Hello, this is the secret service,” as Murchison gently puts in when answering the telephone.  They engage in innocent, child-like banter where every crisis can be resolved with a good strong cup of coffee.  My favourites are Peter and John, two perennially stressed-out health club executives, who; no matter how much whisky they throw out of their glasses whilst thrashing around ideas of “strategy planning” and “ball parks” in their desire to “put Utoxeter on the health club map once and for all”; are forever outwitted by Marjorie, the often unseen force who is able to out-smart her rivals at every turn.  Marjorie appears in one sketch; ensuring that Peter and John are forced out of the health club business – only for them to reappear spouting more tough management-speak as clergymen in the Vatican!

Amongst the old favourites there are plenty of new sketches to delight over; mostly based on the ingenious wordplay comedy that they are famed for.  We have the customer who tries to buy an engagement ring only to be offered an Opal Fruit; and the odd duo who knock door-to-door hoping to enlist people into their society, even though they have no idea what the society is for (“that’s one of the ‘issues’ we’ll be looking at”).   There’s also the episode that is sponsored by ‘Tidyman’s carpets’, a dig at corporate sponsorship that becomes a reoccurring joke.

There is, as you would expect from Fry and Laurie, the usual left-wing bias and elements of satire, but this just adds to the mix of brilliantly written, cleverly performed and original comedy that make this such a classic and enduringly loved series.  I’m looking forward to the series three release already!

This disc also features an extra; the Cambridge Footlights Review that was filmed for television in 1981.  It features Fry and Laurie with Tony Slattery and Emma Thompson.  It’s all a bit hit and miss, in truth, and has a rather too cosy and inclusive “student” comedy feel to it; but it makes for a well-deserved extra and is not without historical interest.  After all, that’s where it all started for them.  Thank goodness for Hugh Laurie’s bout of glandular fever that kept him out of the rowing team and encouraged him to join the Footlights on a whim!