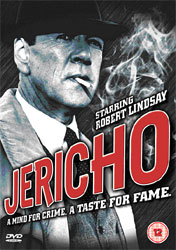 This TV detective drama was one of the highlights of ITV’s schedule last year.  Set in Soho in the late 1950s, the world created by this production is one of seediness and corruption.  Enter Chief Inspector Michael Jericho; one of Scotland Yard’s leading lights and a media savvy darling of the national press, he very publicly uses his crime-fighting expertise to solve a number of baffling cases.

Central to the appeal of this drama is the lead actors, who have been very astutely cast.  In the title role is Robert Lindsay, one of Britain’s greatest character actors (who starred in landmark series such as “Citizen Smith” and some of Alan Bleasdale’s dramas, including “Jake’s Progress” and “GBH”) who brings his seemingly effortless charisma and talent to deliver a beautifully layered performance.  When the audience first meet him, Jericho comes across as vain and glory-hunting, but as the series progresses, we see different facets to the character; such as suppressed guilt and anger over the mysterious death of his father; and unexpected tolerances to minority groups in what was to be the last decade of repression.  Much of this is down to Lindsay’s skill and judgement as an actor, although he benefits from some excellent scripts that are driven along at pace by character as well as plot.  It is wonderful to see David Troughton in a prominent screen role as his sidekick Sergeant Harvey; Troughton’s more familiar medium of the stage has brought him much critical acclaim over the years, and seeing Lindsay and Troughton on screen together is a joy, as we witness their characters develop a touching but often uneasy friendship throughout the episodes.

This series also boasts an array of high-profile guest stars. Peter Bowles is remarkably good as an illegal casino owner, bribing the whole of Scotland Yard (bar Jericho and Harvey, of course) and bringing a very real sense of menace and threat to the story in what is a complete departure from his customary refined and eloquent character studies.  Later episodes feature Jane Horrocks and Claire Bloom.

Despite the prevalence of the niche genre of period detective dramas on television, “Jericho” differs from the rest through tone and content.  It has the look and feel of “film noir”, an all but dead genre that was a product of its time, the 1940s and 50s.  This lends “Jericho” a nostalgic feel, but also gives it closer comparison to the films that were released during the era in which it is set: where everybody is smoking to excess; hats are worn at all times out of doors, there is a post-war optimism but no money, and sinister men in overcoats cast long shadows down dark tunnels.  Although it has an appealing and convincing period feel, the stories detail contemporary concerns that whilst arguably more prevalent in this era, were also serious issues fifty years ago.  We witness the ugly threats of racism and fundamentalism in the first episode; and drug use and celebrities hiding secrets in the second.  Each episode is self-contained and highly entertaining, which should ensure a long and successful run.

“Jericho” certainly doesn’t patronise the viewer with a rose-tinted depiction of London in the 1950s.  Times change but people don’t: hence the constant demand for and popularity of the detective genre – whatever its guise.