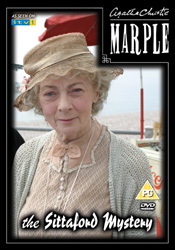 This episode of the latest series of Miss Marple adventures represented the culmination of these classy new productions, available to buy individually or as two box sets featuring every story.

The series is notable for the very high production values, an effortlessly acute central performance by Geraldine McEwan as the elderly sleuth, and a very high calibre of guest actors.  The aim of this revival was to make the old stories more accessible, and these fast-paced and sumptuous looking productions certainly feel like a fresh take on what could have been a stale retelling of a much-used franchise.  The unfortunate shortening of the series title to “Marple” is one of those awful blights of modernisation we could have well done without (I feel sure our heroine would be loathe to be addressed solely by her surname!) but that is a minor grumble.

“The Sittaford Mystery” delivers another cracking case for the eponymous octogenarian to get her dentures into when well-respected establishment figure Captain Clive Trevelyan, hotly tipped to become the next Prime Minister, is warned during a séance that he is soon to die.  A few miles away, Miss Marple is altered to a real-life death threat to the Captain; but with snow falling heavily around the Dartmoor area, trapping a disparate group of travellers with the Captain in an old country hotel, can Trevelyan’s trusty manservant make his way on foot through the blizzard to warn the Captain in time?  Does the death threat have anything to do with Trevelyan’s archaeological looting in Egypt many years before?  Can Miss Marple identify a would-be killer and prevent a murder?

This story follows the usual trademark of a good Marple mystery by keeping the wise old sleuth passively in the background, observing the characters around her and acutely arriving at conclusions whilst outwardly passing herself off as a harmless old dear.  This is clever script writing because the original Christie story, published in 1931, did not feature Miss Marple at all, and it is credit to this production that it maintains the look and feel of a convincing Marple story by keeping the overall plot faithful to Christie’s novel.

The main high-calibre guest actor in “The Sittaford Mystery” is Timothy Dalton, making his first new appearance on British television in fourteen years.  This great ex-pat Shakespearean actor, best known for his short but brilliant stint as James Bond, is now more familiar to American audiences of stage and screen.  He brings his ever-present charisma and talent to the role of Captain Trevelyan and is clearly enjoying himself; especially during the flashback sequences in which he conducts an Indiana Jones-like raid on an Egyptian tomb to bring the treasures back to Britain.  Dalton, relishing the chance to relive the pomp of his courageous leading man legacy, could easily pass for a man decades younger.  Mel Smith brings his lugubrious but loveable qualities to play Trevelyan’s manservant, a slightly surly character and obvious red herring.  Watch out for Robert Hardy playing Winston Churchill (seemingly the only actor in contention to play Britain’s wartime leader).  Other big names include former “Dennis Pennis” star Paul Kaye; and Matthew Kelly, whose current run of sublime acting performances entirely justifies his decision to remove himself from his more familiar persona as a television presenter.

Of course, the end product is slightly absurd and the characters are never fleshed out beyond the exaggerated archetype, but the genius of Agatha Christie is to make her stories compelling and her characters engaging, so that despite the silliness of the action unfolding on screen, “The Sittaford Mystery” remains an engrossing and enjoyable television experience with a healthy injection of humour that never tries to undermine the actors or the plot.  Most importantly for a crime drama, the mystery at the centre of events is intriguing, and the story skilfully woven around it.  The series achieves exactly what it sets out to do by providing a classy and slick example of primetime weekend television.

There is only one extra included on this release, which is a fifteen-minute series of interviews with some of the cast, including James Murray and Geraldine McEwan; but these snapshots of “behind the scenes” insights are interrupted by long inserts of the drama itself, so in reality the interviews do not run for very long.  Sadly, there is no contribution from principal guest star Timothy Dalton; reducing this to a worthwhile but somewhat lightweight addition to the main feature.

Click here to buy 'Marple: The Sittaford Mystery' on DVD