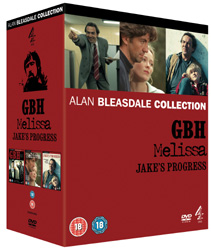 The first series, “G.B.H.”, first shown in 1991, is arguably the best of this collection.  It is the story of two men who unwittingly become each other’s nemesis after their lives and ideologies catastrophically clash.  Michael Murray is an ambitious and charismatic politician and leader of the council of a major Northern city (Liverpool in all but name).  Jim Nelson is the headmaster at a local school for special needs children.  When Murray organises his lackeys into creating strike action and picket lines across the city; Nelson’s school is overlooked.  Unfazed by the militant action, Nelson arrives at the school to find it free from picketers.  He takes the children inside and sets about his working day, but soon draws the attention of the press, who then alert Murray to his failure and make Nelson an unwilling public figure.  Nelson is admired by some for standing up to Murray but pilloried as a scab by others.  Murray then uses threats and intimidation in an attempt to destroy Nelson; just as a beautiful woman arrives on the scene bringing ghosts from the past and a cupboard full of skeletons for Murray to contend with.  The drama races forward to an inevitable showdown between Murray and Nelson: but who will crack first as Murray’s dirty tricks campaign threatens to tear apart the sanity of both men?

“G.B.H.” is a first-rate drama, and one of the best British television serials of all time.  It is a powerful, compelling tale that at times makes you howl with laughter one minute and feel angry and repulsed the next, one of the trademarks of Bleasdale’s extraordinary ability.

The cast is universally excellent.  Bleasdale wrote the part of Murray especially for Robert Lindsay, who makes the most of the opportunity and turns in a BAFTA award-winning performance.  The skill of his characterisation is that, whilst playing an unspeakably vile and immoral man, the more he allows himself to be manipulated by higher powers, and the more his mind unravels, the more the audience sympathises with him as the pathetic, cowardly part of his personality takes over and he becomes beset by uncontrollable twitching in his eyes and arms.  Equally magnificent is Michael Palin, in his best straight performance to date, as Jim Nelson.  Immediately likeable, Nelson maintains our sympathy throughout.  A hypochondriac who suffers from vertigo so much that he cannot drive a car over a low bridge, he cuts the figure of an unlikely hero (despite his heroic name).  But through his defiance in the face of Murray’s threats, and his resolution not to be beaten down despite the risks to his sanity and his family, Nelson emerges as a truly courageous man.

The drama is character-led, and the focus remains on the interplay between the large cast, delivered through Bleasdale’s dazzling dialogue.  However, there are epic moments that remain vividly in the memory.  From the thugs jumping up and down on the roof of the school whilst Nelson tries to calm and protect the frightened children, to the near-apocalyptic race riots in the heart of the city, “G.B.H.” is mesmerising and unforgettable drama.

I cannot fail to make special mention of the late Daniel Massey, who is hysterically funny and endearing as Mr Grosvenor, the crackpot Basil Fawlty-like manager who runs the holiday homes where Nelson attempts to find peace and quiet.  Two scenes spring to mind.  In the first, the sleepwalking Nelson wakes up in a forest with a drunk Grosvenor for company, swinging an umbrella around in a thunderstorm and challenging the lightening to hit him, before telling Nelson exactly what he thinks is wrong with the world.  The other is when Nelson and Grosvenor accidentally chase the wrong car, and catch up not with the thieves they were expecting, but with two priests.  Grosvenor encourages Nelson to ram them off the road, whilst he winds down the window and slaps the car with his flat cap, shouting obscenities at them and later admitting to Nelson that he’s waited his whole life for that opportunity.  Massey’s scenes are gloriously funny, wonderfully played, and amongst the most memorable of the series.

“Melissa”, the second serial in the set made in 1997, is loosely based on the Francis Durbridge novel.  In the accompanying interview, Bleasdale explains that he read a lot of Durbridge and had been keen to make an adaptation of one of his novels, but settled on “Melissa” because it was the only one he could make contemporary and not have to worry about the invention of the mobile phone.

In some ways it feels like a classic detective series from a bygone era; with a young man, Guy, falling for a beautiful, alluring young woman Melissa; who may not be all she seems.  As a series of murders come closer to home, Guy finds himself the chief suspect and the victim of an intriguing plot.

Bill Paterson is excellent as DCI Cameron, determined to find the killer at all costs, and Tim Dutton is a very credible Guy, an innocent man caught up in unexpected circumstances.  “Melissa” is certainly the most straightforward drama out of the three serials, but it remains a superior crime thriller and, cliché though it may be, keeps you guessing to the end.

The third instalment, “Jake’s Progress”, from 1995, is another fascinating character study.  Robert Lindsay and Julie Walters play married couple Jamie and Julie Diadoni.  Jamie is a handsome failed musician, out of work, which forces Julie into becoming the main breadwinner whilst Jamie stays at home to look after Jake, their young son.  Julie is jealous of the strong bond between father and son, and another unexpected pregnancy forces her to be honest about her feelings for Jake.  Whilst at a party, the host Monica (Lindsay Duncan) reads Jamie’s palm and predicts that he will have an affair then die soon afterwards.  Is the reading a prank?  Will Jamie find himself drawn towards his predicted fate?  And will Jake accept the arrival of a sibling into the family, or will his fantasies of killing the child come to fruition?

The drama moves along at a cracking pace, all the time led by the characters so brilliantly brought to life, especially by Robert Lindsay, Julie Walters and Dorothy Tutin who plays Julie’s mother.

Bleasdale brings his own inimitable stamp to his television dramas, not just through his peerless writing, but also by casting the same actors in most of his dramas, who are of course always willing to work with him.  It is the sort of repertory television system that few other than Bleasdale (who keeps creative control as executive producer) can get away with.  Watch out for superb character actors such as Michael Angelis, Julie Walters, Lindsay Duncan, Robert Lindsay, Andrew Schofield and David Ross, who pop up in more than one of these dramas.

Extras include commentaries on some of the episodes of each serial featuring many of the leading actors, and specially filmed interviews with Alan Bleasdale.  These additions are very welcome, and Bleasdale, engaging and assured on screen, gives fascinating insight into his thought processes behind the conception and writing of each serial.

“The Alan Bleasdale Collection” is British television drama at its very best.

Click here to buy 'The Alan Bleasdale Collection' on DVD