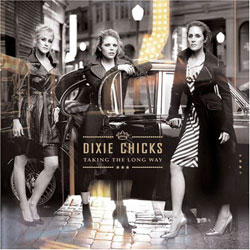 The Dixie Chicks were once the sweethearts of the American country scene. Their pure country sound saw them sell millions of albums, tour relentlessly and become the biggest country group in history. Then in 2003 during a show in London, lead Chick Natalie Maines made some controversial remarks about US President George W Bush. The comments took on a life of their own and before long the Chicks were blacklisted from most US radio stations and anti-Chicks rallies were held where former fans burned their Dixie Chicks CDs and memorabilia. The group received death threats and hatemail by the bucketload and their reputation was severely damaged. Now 3 years later the Chicks return with 'Taking The Long Way', their most personal and political album to date. The group is not ready to back down or apologise for their comments in 2003. Instead they are determined to stay true to their beliefs.

The first single, 'Not Ready To Make Nice', is the Chicks mission statement for this album. The song talks frankly about their 2003 controversy and lead singer Natalie Maines sings 'And how in the world can the words that I said / Send somebody so over the edge / That they'd write me a letter / Sayin' that I better shut up and sing / Or my life will be over". The song is very a very bold statement from the band and it's encouraging to find a band that actually has valid political views. The group, just like everyone else, is entitled to have an opinion and it's more credit to the Chicks that they voice it when so many singers steer clear of politics.

'Taking The Long Way' is a bit of a departure for the Dixie Chicks. Their first three albums more typical country. 2002's 'Home' saw the group mellow a little and provide very acoustic, ballad country songs but on this album the sound is much more commercial. The end result feels a little less raw and a little more polished than previous offerings. This doesn't devalue the album in any way. It's a sign that the group are pushing forward and becoming more competent musicians. The album is co-written by the group and this is the first time they have taken on the role of writers for an entire album. Over the course of the album they team up with Sheryl Crow, John Mayer, Pete Yorn and Keb'Mo. 'I Like It' is infuses a bluesy beat into the country guitars, 'Lubbock Or Leave It' embraces country full-on and is sure to be the highlight of any hoe-down and closing track 'I Hope' sees the Chicks move in a gospel direction. 'I Hope' is a complete departure from anything the Chicks have ever done. The song is spine tingling and recalls some of Sheryl Crow's early material. It could easily become one of the Chicks signature tunes and is an indication that the group is beginning to move on from their experiences.

The album highlight is the gorgeous 'Lullaby'. The song was written about Emily Robison and Martie Maguire's children (both had twins after the release of 'Home'). The song is a gentle, acoustic ballad and is absolutely beautiful.

'Taking The Long Way' is a brave album. The collection is filled with the group’s feelings and thoughts. It's refreshing to see a group that refuses to back down after controversy. The Chicks have proven their critics wrong with this album. It entered the Billboard charts at number 1 after many had written the group off. It would seem the group have maintained and increased their fanbase since their 2003 controversy. Perhaps this is proof that they aren't the only ones feeling the way they do about the current state of the world. Either way the Chicks are stronger than ever before and 'Taking The Long Way' is the first step to turning the attention back to their music.