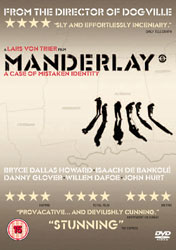 'Manderlay' is the sequel to 2003's critically acclaimed 'Dogville' and is the second part of Lars Von Trier's America trilogy. Taking the same approach as 'Dogville', 'Manderlay' has sparse settings and is filmed on a single soundstage. The main role of Grace this time round is played by Bryce Dallas Howard rather than Nicole Kidman. The supporting cast includes many of the first film's actors - Lauren Bacall, Udo Kier and Chloe Sevigny all return in different roles.

In this film Grace is travelling back home from Dogville with her father after the horrific events of the first film. As they pass the town of Manderlay, Grace spots a black man tied up outside a wealthy estate. Asking her driver to stop, Grace, against the advice of her father (played by Willem Dafoe rather than James Caan) gets out of her car to take a closer look. She soon realises that a wealthy white family are keeping black slaves despite slavery being abolished 70 years earlier. Grace finds the head of the family (Lauren Bacall) on her deathbed and sees the opprotunity to make changes and liberate the slaves. She asks her father to leave her at Manderlay whilst she takes control and rights a wrong situation.

As it typical with Lars Von Triers' films 'Manderlay' is not as straightforward as it seems. The film is narrated by John Hurt (as was the first) and his narration helps to guide the viewer through the film's events. 'Manderlay' is split into eight chapters and explores Grace's input into the town's community. Bryce Dallas Howard plays a very different Grace from that which Nicole Kidman protrayed in 'Dogville'. Whereas Kidman's Grace was eager to help, mysterious and mild-mannered, Howard's is brash, headstrong and forceful. She frequently appears naive and despite meaning well often makes a situation worse. She sees what she believes is injustice and storms straight in to put it right. Grace doesn't consider asking the people how they feel because she assumes she already knows. This ultimately becomes her downfall. Howard displays an impressive range as Grace but she is no Nicole Kidman. Rumour suggests that both actresses will share the role in the final part of the trilogy. The character of Grace has changed since 'Dogville' and Howard is believable in her portrayal. It would have been interesting to see Kidman progress the role.

It's easy to understand why 'Manderlay' is so controversial and has not fared well in the US. The film makes a direct statement about America's idea of democracy. The film's core moral is that rich white Americans should not interfere in matters they do not understand. In 'Manderlay' Grace sees a black community and without meaning to she tries to make them the same as her. She doesn't realise that her assumptions could be highly offensive and insulting. Her idea of introducing democracy is seriously flawed. Decisions are made flippantly and as the film progresses Grace realises the trouble and destruction she has caused. One of the key scenes is when a member of the community may or may not have indirectly caused the death of a child. The punishment for this person is based on anger rather than justice and forces Grace to carry out an execution to avoid being labelled a hypocrite.

'Manderlay' isn't an easy film to watch but it is incredibly rewarding and thought provoking. The issues tackled in the film are handled magnificently and the film pushes the boundaries frequently. 'Manderlay' is a strong sequel to the incredible 'Dogville' and if the third installment is as good this will be a classic trilogy. 'Manderlay' provides food for thought and we can all learn to be better people from it.