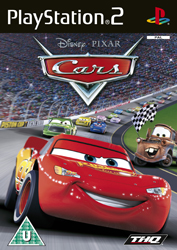 'Cars' is based on the brand new Pixar movie of the same name. Allowing the gamer to take control of Lightning Jack and many other characters from the movie, the game is split into a variety of play modes. The game is sure to be a hit with the kids and is likely to win over some older gamers too.

The main playing mode is the story mode. This lets the gamer explore the town of Radiator Springs as they work up to competing in the Piston Cup. You can drive around the town and interact with many of the Cars characters and also participate in mini games. One mini-game challenges you to find a series of postcards spread around the game. Another nice touch is the ability to spray paint your car and change its appearance. The main emphasis of the game is on winning races and practicing for the big race – the Piston Cup. The races are fun and the tracks offer different degrees of difficulty. The tracks are incredibly detailed and look just like they do in the movie. The different challenges in the story mode are punctuated by cut scenes that help progress the game's story. These are all voiced by the actors from the movie and are often very entertaining.

One of the problems with 'Cars' is the controls. For the most part they are fine but the lack of any ability to reverse can be frustrating at times. Often when you crash it can be hard to get your car back on track and catch up with your competitors. The addition of reversing would have been much welcomed and would have created an almost flawless control system. As it stands this is the main sticking point I found with the game. It's not a huge problem but it feels as if it has been slightly overlooked.

Overall 'Cars' is a competent and fun gaming experience. The variety of play modes is a definite plus and ensures that gamers will replay the game. It's a great tie-in to the film (released in the UK at the end of the month) and is sure to keep the kids quiet for a few hours. 'Cars' is bright, colourful, fun and entertaining; the perfect recipe for an enjoyable gaming experience.