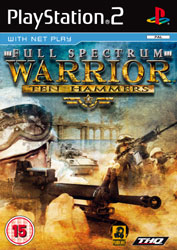 'Full Spectrum Warrior: Ten Hammers' is the sequel to 2004's 'Full Spectrum Warrior'. The game allows players to control the actions of a variety of military squads through hostile environments in a bid to stabilize Zekistan, a country over-run with terrorists. By taking on the role of the squad leader you must guide your team to complete objectives and eliminate the terrorist threats.

'Ten Hammers' is an ambitious game and furthers the interesting spin on strategy games started by the original 'Full Spectrum Warrior' game. The game is split up into 12 missions and this time round you get the opportunity to control vehicles. The biggest plus of 'Ten Hammers' is the strategy aspect. You really have to carefully consider your options before you begin your missions. You constantly have to outthink and outmanoeuver the enemy to succeed.

The biggest problem with 'Ten Hammers' is the complex nature of the controls. There are a variety of different options available but getting to grips with them all takes a while. Learning the different 'Order' combinations on top of all of the other controls can be very difficult. I also found that some of the controls were slow to respond and this often meant the difference between life and death for the soliders.

The 'Ten Hammers' environment is impressively detailed but sometimes the lack of colour variations can make the game feel a little dull. Something I found particulary annoying was the American voiceover used throughout the game. The game script leaves a lot to be desired and I think the game would have benefitted from less voiceovers and cutscenes.

'Ten Hammers' is an enjoyable but frustrating game. The basic concept is great and a fantastic variation on the strategy genre. Unfortunately it falls shor tof being a great experience due to the poor story, annoying voiceover acting and complex control system. Fans of military games are sure to love it but I can't really see it extending out of that audience. The game isn't likely to appeal to a wide variety of gamers.