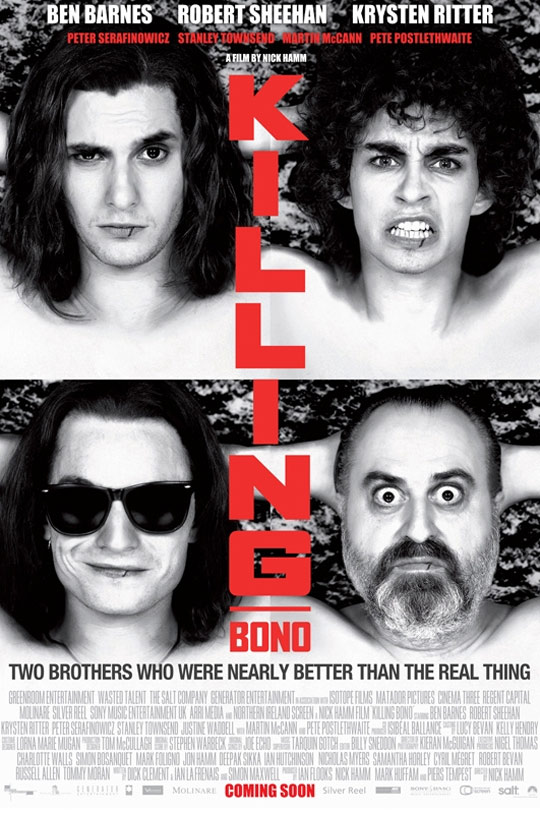 Take two hapless brothers, the comic genius of The Commitment writers Dick Clement and Ian La Frenais, some seriously bizarre haircuts, the biggest Irish export since Guinness, and you’ve got yourself a funny and rock-filled trip through musical history.
The Telegraph’s chief rock music critic, best-selling author and a television and radio pundit, it would seem like Neil McCormick has done pretty well for himself. However, there’s one dream he has failed to fulfil – rock star superstardom.
An adaptation of McCormick’s autobiography, ‘I Was Bono’s Doppelganger’ sees the true-ish story of two Irish brothers, Neil (Ben Barnes) and Ivan McCormick (Robert Sheehan) and their attempt to take their band into stardom only to be constantly overshadowed by their old school friend, Paul Hewson’s (Martin McCann) success – better known today as U2’s Bono.
Neil McCormick’s hopeless optimism, reasonable talent and burning desire to become a veritable Rock God, is met with a 10 year string of bad luck and even worse decisions, making viewers sympathize and perhaps question the possibility of anyone catching so many bad breaks.
So does he cure his desperation by actually killing Bono? Evidently, no. The provocative and misleading name of the title was inspired by a comment by the man himself; telling McCormick that the only way he could move on with his life was to, metaphorically speaking, kill him.
Featuring guest appearances by the Pope, Bob Dylan, and a medley of stars, the film is directed by Belfast-born, ‘The Hole’ director, Nick Hamm. The cast also includes (the late) Pete Postlethwaite, Charlie Cox, Ralph Brown and Peter Serafinowicz.
U2 fans aside, Killing Bono not only candidly portrays the personalities of the band in its early stages without sounding too gossipy, but offers an extremely funny and strangely moving account of the road McCormick failed to travel by, being driven by that ‘everyman’ quality to a loser’s story that we can all relate to.