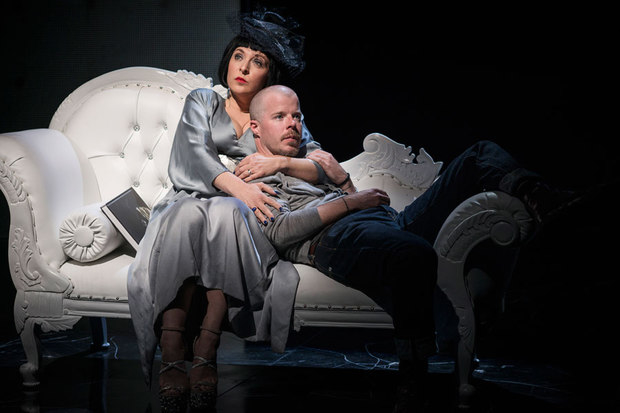 McQueen received its world premiere in May at St. James Theatre, where it broke box office records. In August 2015 the show transferred to the Theatre Royal Haymarket in London’s West End. Written by James Phillips and directed by John Caird, the production stars award-winning actor Stephen Wight in the title role of Alexander McQueen.

McQueen is a journey into the visionary imagination and dream world of Alexander McQueen, fashion's greatest contemporary artist. Set on a single London night, it is more than a bio-play. It is stepping into the fairy story landscape of McQueen's mind, the landscape seen in his immortal shows, where with a dress an urchin can become an Amazon, where beauty might just help us survive the night. A girl has watched McQueen's Mayfair house for eleven consecutive days. Tonight she climbs down from her watching tree and breaks into his house, to steal a dress, to become someone special. He catches her, but, instead of calling the police, they embark together on a journey through London and into his heart.

“Powerful and memorable” - The Sunday Times, Christopher Hart
“Stephen Wight captures the tormented genius of Alexander McQueen” - Henry Hitchings, Evening Standard
“Christopher Marney’s choreography is sensual and menacing. David Farley’s design elegant and evocative” - The Times, Clive Davis
“It was as though the play and Stephen’s performance brought Lee back to me again. I felt as though he was real again for me.” - Janet McQueen, one of Lee Alexander McQueen’s sisters
Book your tickets here.