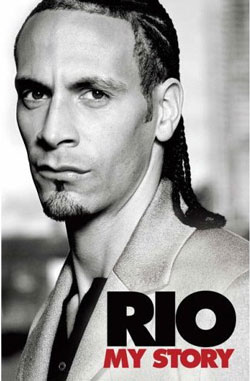 WE’VE ALL READ THE FRONT AND BACK PAGE STORIES. NOW, FOR THE FIRST TIME, RIO TELLS IT AS IT IS, FROM THE HEART, NO HOLDS BARRED.

THE MOST CONTROVERSIAL SPORTS BOOK OF THE YEAR, INCLUDES THE INSIDE STORY ON THE WORLD CUP 2006.

He is one of the most gifted footballers these shores have ever produced, twice breaking the British transfer record and hugely admired, but he courts controversy in equal measure…

If success on the pitch has kept Rio Ferdinand on the back pages, his off-pitch story has made him a regular on the front pages. Here for the very first time, Ferdinand reveals all about his infamous missed drugs test, the controversies surrounding both his transfers, his supposed reluctance to re-sign for United in 2005, the alleged tapping-up meeting with Chelsea’s Peter Kenyon and various sex, driving and anti-social behaviour scandals. Beyond the football, Ferdinand’s personal story will also fascinate. Here he discusses his upbringing in Peckham, his work with young offenders and his music label which provides unique opportunities for underprivileged youths.

Rio Ferdinand was born in Peckham,  and signed for West Ham as a schoolboy, turning professional at the age of 17. He made his debut in May 1996 and played 158 games for the Hammers before transferring to Leeds United in November 2000, with whom he reached the Champions League semi-final in 2001. Following his star performance in the 2002 World Cup, he joined Manchester United for £30 million, making him one of the world’s most expensive defenders. He made his England debut in March 1998 and has won 53 caps, scoring one vital goal in the 2002 World Cup. He was one of England’s pivotal players in the 2006 World Cup.