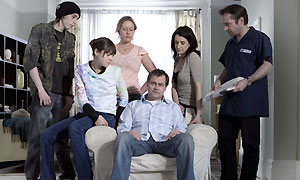 Jack Dee stars as Rick Spleen, a successful but disillusioned and world-weary stand-up comedian and writer who spends too much time hosting corporate events.

The Heating and Ventilation Awards may not be the most glamorous gig, but the money he earns allows him to concentrate on his first love… TV commercials.

"Rick Spleen is a comedian who has lost his way," says Jack. "He's not as funny as he wishes he was or thinks he is. He's hopeful that there's something around the corner. And there's a perfectly reasonable explanation as to why it hasn't happened yet."

Rick and Marty, his American co-writer, spend their days arguing about every subject under the sun, drinking too much coffee, and devising work avoidance strategies.

Further distractions are provided by Magda, Rick's Eastern European daily help. Magda is learning English from daytime television but her own tales of woe put to shame anything you might hear on Trisha.

Rick's wife, Mel, is a showbiz agent who looks after C-list celebrities hoping for that big break: having an enema, live on Fat Camp.

She knows that Rick is his own worst enemy; unless you count anyone he comes into contact with.

Rick and Mel have a 17-year-old daughter, Sam, who would be the world's least motivated human being, were it not for her boyfriend, Ben.

While Michael, the owner of the local wholefood café where Rick and Marty spend a lot of their writing time, appears to be completely unhinged.

Whether he is being accused of putting on weight, suspected of being gay, or worried about accidentally poisoning another performer, Rick (Jack Dee) combines a mass of neuroses and petty grievances with a terrible propensity for lying - it is not a recipe for success.