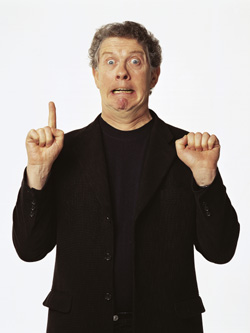 Born Phil Martin in Chorley, Lancashire, Phil Cool shot to prominence in the late eighties when, after many hard years on the cabaret circuit, a producer from the BBC spotted him working as an audience "warm up" for the satirical television programme Spitting Image.

This led to an appearance on daytime television's Pebble Mill, which was so successful that he was immediately snapped up to record a series for the BBC.

Such was the response from public and press that the series - 'Cool It' - was repeated on BBC1 within a matter of months unheard of for a new television artist. His second series won the Royal Television Society Award for Most Original Television Achievement, and a third series was screened the following year.

Since then all three series have been repeated to great acclaim and Phil has also starred in his own BBC Christmas Special as well as two series 'Cool Head' and 'Phil Cool' for Central TV. His video releases have included 'Cool It', 'Cool It Too', 'Cool & Hot', 'Cool Head' and 'Classic Cool'.

He has also released an album on Virgin Records 'Not Just a Pretty Face' and a book.

"Cool it! Out of the shadows lurches one of the cleverest comedians of this or any other generation"
News of the World