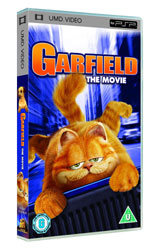 'Garfield' is based on the classic cartoon of the same name. I remember being a huge 'Garfield' fan when I was a child and was hooked on the cartoon. As you probably know Garfield is a lazy cat who loves lasagne and doing as little as possible. For the big screen version Garfield's basic characteristics haven't changed but his appearance has. Garfield in the movie looks quite different to the Garfield you'll remember from the cartoon. The maker's of the movie opted to use a CGI Garfield but oddly chose to use a real dog for Odie - and this Odie looks nothing like the one from the cartoon. This is a bit of a shame for fans of the original series but it's not a big problem for the movie.

The basic premise sees Garfield's owner, Jon Arbuckle (Breckin Meyer) offer to rehome an abandoned dog in the hope he can impress local vet - and high-school crush - Liz (Jennifer Love  Hewitt). Upset with his owner, Garfield decides to make Odie's life a misery and throws him out of the house. Odie runs away and is captured by wannabe TV star Happy Chapman, who is determined to make money out of his new pet. Garfield realises he must get Odie back to save him from Happy and win back Jon's affections.

'Garfield' is a real family movie. The plot stretches credibility but it should prove a hit with younger viewers. Bill Murray is the voice of Garfield and ensures that the cat's personality stays true to the cartoon. Breckin Meyer and Jennifer Love Hewitt provide star power to the movie but it is the array of animals and the animated Garfield that keep the viewer's attention. Over the course of film there are cats, dogs, rats and a streetwise mouse to help Garfield save Odie.

At only 80 minutes long, the film doesn't outstay its welcome and is well-paced and entertaining. It doesn't hold much crossover appeal for an adult audience but fans of the cartoon will undoubtedly be curious to see a new Garfield story.

The UMD does not contain any extra which is a little disappointing. It would have been nice to have some deleted scenes or a short making of featurette to complete the package.

'Garfield' isn't destined to be a classic but it should keep kids entertained, which is its main objective. The story is interesting enough but the characters don't really get fleshed out. I'm intrigued to see the sequel which is due out later this year.

Click here to buy 'Garfield - The Movie' on UMD