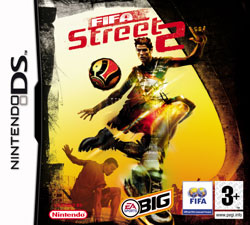 This game isn’t about your cool, slick “Chelski” style of football.  This version of the beautiful game is decidedly more brutal.  Think along the lines of the Millwall B-team having a knock about against a local gang in a graffiti-ridden park.  Here, slick moves are deployed as much to take out the opposition as to outwit them with ball control, which for easily-out played competitors such as myself, makes the game quite a lot of fun.

You can dive in straight away with an international game against most regular World Cup teams, and in the spirit of highly-charged combative play, it defaults to England v Scotland!  Who could resist such a draw?

Getting used to playing with only four per side is the most unusual feature of the game but this does lend it a very “street football” feel, and the more compact playing area works to the strengths of the DS.  If the field of play were any larger or more populated, control would become almost impossible.

What I do find quite difficult about the game is playing it to its full potential.  The left hand is taken up with controlling the movement of the players, whilst the right hand is deployed to select the functions and hold down the side button to make the players run.  On top of this the player is required to produce a number of fancy sporting tricks, or “beat moves”, in order to either keep possession of the ball, or outwit an opponent with an attacking or defensive manoeuvre.  This is done by manipulating the stylus in certain directions across the touch sensitive screen, and one could really do with an extra hand.  I have yet to decide whether I prefer to leave the stylus in my mouth or keep it lodged between my fingers but this is one aspect of game play that will become easier and more natural in time.  The more beat moves you rack up, the better your team plays and the greater chance you have of breaking down the opposition so be advised to start practicing your beat moves straight away!

Other fun parts of the game are all about tailoring it to your own specifications.  You can design and build players, teams, and even kits.  If you build your own team you are then pitted in rounds against other less “professional” teams until you can start running up the rankings.  There is a big difference in play here though, and going along the route of building your own team is a much harder challenge.  To begin with, the players you have are not terribly skilful.  Thankfully, the opposition are not usually much better!  This can make the game more frustrating but more rewarding when you win.

The overall look of the game is consistent and well done.  The point of view during play remains entirely along the right hand side of the pitch, so variation is somewhat limited, which is especially noticeable when scoring goals, as sometimes you can be left with no idea how you missed, or even scored!  Other parts of gameplay, such as tackling and passing, offer more variety.  It is still a very playable game, and options such as two-minute halves mean that the pace is highly engaging and frenetic.

I have enjoyed playing 'FIFA Street 2', and whilst I have so far been drawn to the lure of pre-prepared International sides, I’m sure I will work my way through the ranks with a side of my own creation, as soon as I become more comfortable with the beat moves!