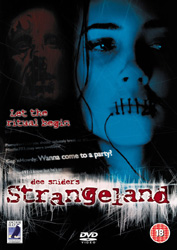 'Strangeland' is a little known horror/thriller by Twisted Sister frontman Dee Snider. The film sets out to explore the dangerous side of using Internet chatrooms. Teens Genevieve Gage (Linda Cardellini) and Tiana Moore (Amal Rhoe) decide to meet up with their online chat buddy Captain Howdy (Dee Snider) after receiving an invitation to a party at his house. With little hesitation the two girls make their way to the party and fail to return home by morning. Unfortunately Captain Howdy turns out to be a sadistic torturer and kills Tiana, leaving Genevieve trapped in his basement. In a race against time Genevieve's parents have to find her before she dies at the hands of Captain Howdy.

The movie has an interesting premise. When it was released in 1998 the Internet was really beginning to take off and the dangers of meeting people via chatrooms was a much highlighted subject. Unfrotunately 'Strangeland' takes the subject and fails to make a very good film out of it. The movie looks and feels like a TV movie rather than a horror movie. The acting, with the exception of Linda Cardellini and Robert Englund, is universally dreadful. This would appear to be a combination of poor direction and a cliche-ridden script. It's difficult to take a movie seriously when the characters frequently explain what is going on - especially when the film isn't particularly difficult to follow in the first place. Heavy goth-metal music is overused and ill-fitting with the subject matter.

Despite all this the movie is entertaining on some levels. Linda Cardellini (better known for her work in 'Scooby Doo' and 'ER') does the best she can with the material. I genuinely felt her pain and suffering and her performance kept my attention. Another plus is a rather hammy turn by horror icon Robert Englund. Englund is in his element in this kind of movie and is always a delight to see on screen. To be honest Cardellini and Englund are the main reasons to invest your time watching 'Strangland'.

The scenes in Captain Howdy's basement aren't as horrific or scary as you would expect. The poor special effects do not allow you to believe what is happening on the screen. A perfect example is when Captain Howdy pierces his arm. The skin looks too much like rubber to be believable.

'Strangeland' is a frustrating movie. What could have been a horror triumph turns into a hammy b-movie. Fans of the horror genre will most likely find something to enjoy here. The movie tries to explore the mind and rehabilitation of a calculated killer but the end result is just no satisfying enough.

Celebrities Worldwide Rating: 4 out of 10