Shadows In The Sun 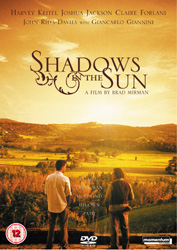 ‘Shadows In The Sun’ is an enchanting film about a young writer who goes in search of a reclusive literary giant in the hope of persuading him to write another novel.

The plot gets moving straight away as frustrated editor but aspiring writer Jeremy Taylor (a commanding central performance from Joshua Jackson) is sent to Italy by his boss, an amusing cameo from John Rhys-Davies, to find renowned author Weldon Parish and persuade him to sign a book deal.  From the hustle and bustle of London, Taylor arrives in rural Italy and begins his search.

A large part of the appeal of this film is the beautiful Italian scenery that the director strongly uses to his advantage to make each scene look like an advert for the Italian Tourism Board.  Taylor is the proverbial fish out of water in the film, bringing with him his city ways, slick suits, a fast car and a commercial mind.  The slower, intimate pace of the rural setting he finds himself in is not one he understands, even though he begins to appreciate it.

He soon tracks down Weldon Parish, who almost convinces him that he is barking mad.  When that ruse doesn’t work, Parish humorously sets the dog on him and then threatens to drown him in a shallow pond.  In fine showy form as Parish is Harvey Keitel, looking every bit the writer in his baggy shirt and flat cap, who throws his arms about a lot for good measure.  He manages to stay on the right side of the charismatic/hammy line, but Jackson’s grounded performance as his nemesis and later friend keeps the film believable.

As Taylor gradually wheedles his way deeper into Parish’s life, he wins the trust of his friends, who are likewise convinced that Parish secretly wants to write again and is just using his wife’s tragic death twenty years earlier as an excuse to not have to face his fear of failure.  At the same time, Taylor is struggling with his own demons of self-doubt about his writing ability; and as the two men start to know each other better and form the basis of a friendship, it becomes apparent to all that they can help each other.  However, every time Taylor raises the idea of Parish writing again, he is violently rebuked.  It is only when talking about his writing that Parish becomes serious, at all other times he lives the life of a carefree clown, repeatedly earning himself a night in the cells or taking an impromptu skinny-dipping session.

The love interest for Taylor comes in the shape of Claire Forlani, an English-born actress, but with a convincingly sustained Italian accent.  Taylor is enamoured with every part of Parish’s life, and falling in love with his daughter Isabella seems the next obvious step.  Theirs is more a meeting of minds that an all-consuming passion, but the scenes they have together are well-played and the actors are able to convey a subtle chemistry.

My only major concern is that the plot is very predictable and all the twists and turning points are entirely expected.  It is not a film that will ever surprise you; but it succeeds in remaining a feel-good movie, one that can lift the spirits and temporarily make you believe that people can change and the achieving of ambitions is possible.  The overall tone of the film manages not to be too sentimental, except when Parish talks about writing, or asks Taylor to describe what he sees.  On those occasions the dialogue is maudlin, but it is not sufficient to spoil the enjoyment of a well-told story.

Ultimately, the film benefits from a classic structure and an endearing and interesting story, that should keep you entertained until the end.  It is lifted above average by the universally good performances and stunning locations.