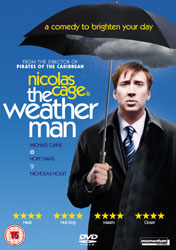 David Spritz (Nicholas Cage) is at a cross roads in his life, personally and professionally. Separated from his wife and children and looking for his next step as a television weather man David is on a slow downward spiral. When David's dad Robert (Michael Caine) breaks some life-changing news, David is forced to put his mid-life crisis aside and begin to pick up the fractured pieces of his existence. He must help his son Mike (Nicholas Hoult) and his daughter Shelly (Gemmenne de la Pena) get their lives on track and ultimately face his own personal difficulties head on.

The first thing 'The Weather Man' proved to me is that I'm not as good a judge of films as I thought I was. Based on the trailer I thought this was going to be a light-hearted comedy. In actuality 'The Weather Man' is a darkly comic and frequently tragic account of a man with no purpose or direction in his life. A man who doesn't have the respect of his own family or of the general public. David Spritz is frequently pelted with various items of food by passers-by and is as hated as his is loved by the TV viewing public. Nicholas Cage turns in a remarkable performance in the lead role. You get the impression that David isn't quite as together as the average human being and Cage plays the role with subtle undertones of menace and frustration. Cage's Spritz is difficult to read and this often plays to his advantage, as you're never quite sure what he is going to do next. There is a wonderful scene where David randomly attacks his ex-wife's boyfriend for no apparent reason other than the fact he wanted to. The scene is one of the laugh-out loud moments scattered throughout the film.

Michael Caine puts in a solid performance as David's unsupportive father Robert Spritzel. Nicholas Hoult and Gemmenne de la Pena are wonderful as Spritz's not-so-bright kids and Hope Davis really convinces as the long-suffering ex-wife. The biggest surprise in the cast is Gil Bellows (Billy from 'Ally McBeal') playing against type as Mike's rather creepy counseller. The role is a million miles away from what Bellows usually plays and he is very good in the part.

There are two problems with 'The Weather Man'. Firstly Michael Caine and Nicholas Hoult's American accents are all over the place. Sometimes they sound convincing but too often an English accent creeps in. I found this particularly distracting. Secondly the film is quite slow paced. Not a great deal happens over the course of the movie and some viewers may find this frustrating. I enjoyed the movie and it affected me in a way I didn't expect. I really felt for David Spritz and I wanted him to achieve everything he sets out to do.

The DVD bonus features are worth exploring. There are 5 featurettes on the disc that explore everything from the script through to the individual characters. They are very informative and provide a good insight into the film and the making of it.

'The Weather Man' is a film that will likely divide people. Personally I enjoyed it. It's an interesting portrayal of a man trying to regain control and it's nice to watch a film that isn't afraid to explore the darker side of human nature.

Click here to buy 'The Weather Man' on DVD