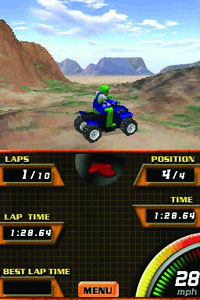 This is a quad bike racing game that requires the player to drive over difficult and hilly terrain, racing against other players, whilst performing a variety of crazy stunts for bonus points.  You can play against the console itself, or hook up with friends for a race against up to three other people.

The controls are thankfully simple, requiring the player to control the speed and direction of their quad, whilst using the stylus to select which stunt to perform.  Controlling the quad can be pretty tricky, especially when the terrain becomes increasingly hilly and the corners sharper and more beset with obstacles the further you progress, but mastering the left and right power slides can stand you in good stead in getting round the bends in the track quickly and safely.

There are several modes within which you can play.  The practice levels are quite useful because successful progression can unlock courses that you have not yet reached in competitive play, as well as allowing you to complete courses without the added pressure of competition from other players.  I find a quick practice a useful warm-up before the altogether more strenuous “quick race” and “Championship Season Racing”.  The quick race allows you to play instantly on any of the tracks you have unlocked following successful progression, and is useful when you don’t have much time to play.  The “Championship Season Racing” is the option for the serious players.  Here you compete for the fastest completion time for each track and progress to the next one after a first or second place finish.  You also earn money to spend in the performance shop, which makes your quad gradually better and better, from the suspension to brake handling.

At first I found it easier to concentrate on staying on the quad and keeping up with or beating the other players; and it is possible to play the whole game in this way.  You concentrate on controlling the quad as it flies over mounds of earth, whilst finding the quickest route to cut in front of the other players and complete three laps first.  However, after gaining confidence I found it much more fun to practice the stunts, successful implementation of which yield greater points, which you perform whilst the quad is in mid-air.  There are twelve pre-programmed stunts, which you use the stylus to select before implementing, and some are harder than others to carry off.  They look great, and if performed smoothly, can give you great satisfaction and do not delay you in keeping up with the race as the time is taken into consideration.  But take caution, if the quad leaves the ground on an angle, the more likely it is to roll over and knock you off when you land again, especially if you are hanging on to the handlebars to perform a stunt.  Like most things, timing is everything!  The worst part of the game is landing badly and falling off the quad, only to restart the game from where the quad last landed, which can be a long way off the route.  The other players you previously had distance between now race past you as you pick your way through rocks and bracken back to the track, making sure from the control panel that you are heading the right way!

As you would expect, the further you progress in the game, the more treacherous the courses become making it harder to stay on the quad and sometimes very difficult to keep on the outlined route.  Each course feels distinct from the others through differences in terrain, which affects the way in which the quad handles.  Sometimes you will race across an arid desert, the next course may be on ice.  Some courses require you to drive through shallow water; some may be over fairly flat terrain whilst others are horrendously hilly.  All of which may play to your strengths or weaknesses, and influence how effectively you can perform the crazy stunts.

For those that wouldn’t normally play a stunt racing game, they may find this a little repetitive. However, the game is great fun and immensely playable.  There is also something quite compulsive about it, especially for fans of the racing game, which for me was trying out different stunts on different terrains.  It is also quite satisfying and challenging, whilst the full championship season option allows for variety and progression over a long period.