Celebrities Worldwides associate company UPFRONT organised the celebrity turnout for the Burton Best of British Football Academy on Sunday 6th June at Bisham Abbey in Buckinghamshire.   On the day there was a unique charity Celebrity 5-a-side tournament along with a coaching session for the celebrities with Ex England Managers Sir Bobby Robson, Terry Venables and Ex England & Nottingham Forest defender Stuart Pearce.  Rod Stewart and Penny Lancaster also flew in especially to lend their support to this fantastic day.

Please see below some pictures taken on the day.

The event was also attended by Stephanie Moore MBE, widow of the England legend Bobby Moore.  She was handed a cheque for £25,000 which was raised on the day for The Bobby Moore Fund for Cancer Research. 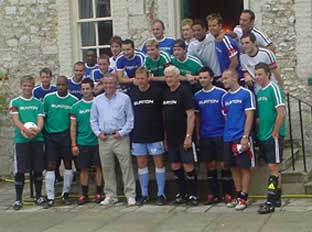