Celebrities Worldwides associate company Upfront arranged for Mark Owen (see picture below) to attend this years Cinema For Peace Charity Gala, held in association with UNICEF and amfAR (American Foundation for AIDS Research), at the historic Konzerthaus located at the magnificent "Gendarmenmarkt" in Berlin on Monday, February 9th 2004.

The event, which took place during the Berlin Film Festival and was hosted by Liza Minnelli and Christopher Lee.

There has not been a single day of peace on earth since World War II and the tragedy of Sep­tember 11 in New York proves once more how fragile peace is  everywhere in the world.  Cinema always had a signi­fi­cant impact on public awareness, which led to the idea of Cinema For Peace, launched in 2002 and now gaining broad natio­nal and international support. This is reflec­ted in the members of the gala committee including per­so­nalities such as Catherine Zeta-Jones, Catherine Deneuve, Roger Moore, Liam Neeson and Christopher Lee.

Cinema For Peace fo­cu­­ses on the responsibi­l­ity of the film and media industry in de­veloping and communica­ting huma­nita­rian issues and to help improve intercultural relations.  In 2003 the guest speaker was Dustin Hoffman whose keynote Freedom Speech was broadcast worldwide. He was joined at the event by George Clooney, Faye Dunaway and Nadia Auermann attracting further global media attention. Other guests have included Robert Altman, Donald Sutherland and Jack Valenti.

Supported by UNI­CEF ambassador Roger Moore, last years event raised 250,000 USD for Chil­­dren In War-Regions. The committee presented the peace band which has a similar function as the Red AIDS Ribbon which brought the World Peace Flame to Berlin for the first time and gave the Cinema For Peace award to Danis Tanovic for his Bosnian Oscar-winning movie No Mans Land. In 2002 the award was given to István Szabó for his portrayal of the Jewish struggle for survival after World War II. 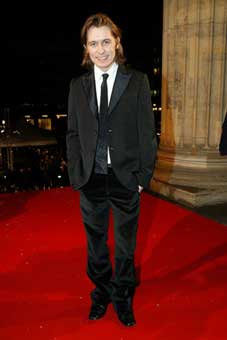